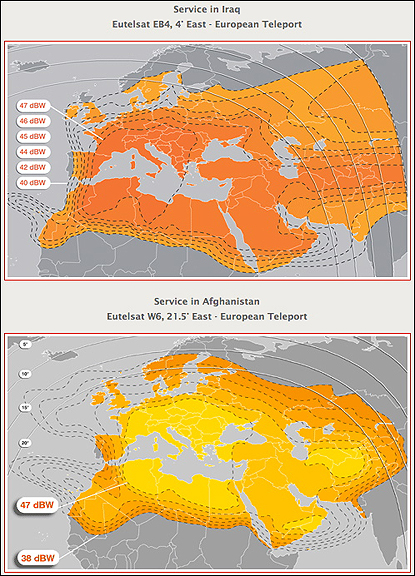 More info...
TS2 Satellite Technologies company is introducing new broadband services on Eutelsat EB4 & W6 satellites for the Afghan market. These types of telecommunication products are mainly used by the companies that execute contracts in Asia, as well as by the soldiers that are stationed in Afghanistan.

Purchased bands gives TS2 unlimited possibilities of configuration and setting any telecommunication connections from the Near East region and South-Western Asia. The broadband service offer two-way high-speed Internet access with no phone lines, no cable, no dial-up modem. It's always online, available virtually anywhere, and affordable. The offered satellite system is ideally suited for broadband requirements such as Internet and VPN access to enterprise networks, as well as real-time VoIP and video conferencing.

The Internet connection can be shared with other users via wireless or wired network. Most soldiers deploy with a laptop in hand and a hookup to the Internet in their barracks. This is especially important for the many who are married, and have young children. The Internet access has resulted in major morale improvements. Troops no longer feel cut off from home. Not all the Internet connectivity is just for staying in touch with the folks back home. The troops in Afghanistan also use the Internet for professional tasks — some troops blog, and many other stay in touch with military friends and associates in other parts of the world. The Internet has made possible many online communities composed of military professionals. Without the new satellite system, large numbers of soldiers would be without regular communications for much or most of their time in Afghanistan.

Eutelsat’s W6 (formerly W3) satellite is located at 21.5 degrees East and features 28 simultaneously active transponders. This satellite is ideal for applications such as VSAT networks, broadband Internet and data broadcasting. It is most suitable for companies that require communications between Europe, North Africa, the Sahara, the Middle East and the Gulf region. The EUROBIRD 4, also called as EB4, is one of Eutelsat’s satellites that provides coverage from 4 degrees East for Europe, North Africa, the Middle East and central Asia in Ku-band frequencies.