[SatNews] The three-day test took place in July, taking seven engineers and six technicians about 20 hours to complete. On orbit, the sunshield will take several days to unfold.

A major test of the sunshield for NASA’s James Webb Space Telescope was conducted recently by Northrop Grumman in Redondo Beach, California. For the first time, the five sunshield test layers were unfolded and separated; unveiling important insights for the engineers and technicians as to how the deployment will take place when the telescope launches into space. 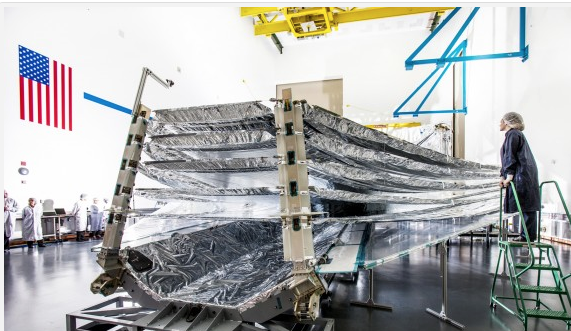 “These tests are critical and allow us to see how our modeling works and learn about any modifications we may need to make in our design as we move into sunshield flight production,” said Jim Flynn, Webb sunshield manager.

The three-day test took place in July, taking seven engineers and six technicians about 20 hours to complete. On orbit, the sunshield will take several days to unfold.

“Tests on the ground are a little bit tricky because we have to account for gravity,” says Flynn. “Webb won’t face those same challenges in space. To overcome challenges on the ground, our technicians came up with the idea to rest the layers on a structure of metal beams covered by plastic.”

The tennis court-sized sunshield, which is the largest part of the observatory, will be folded up around the Webb telescope’s mirrors and instruments during launch. As the telescope travels to its orbit one million miles from Earth, it will receive a command to unfold and separate the sunshield's five layers into their precisely stacked arrangement with its kite-like shape.

The sunshield separates the observatory into a warm, sun-facing side (reaching temperatures close to 400 degrees Farenheit), and a cold side (185 degrees below zero) where the sunlight is blocked from interfering with the sensitive telescope instruments. It provides the instruments with an effective sun protection factor, or SPF, of one million.

The sunshield’s membrane layers, each as thin as a human hair, are made of Kapton, a tough, high-performance plastic coated with a reflective metal. On orbit, the observatory will be pointed so that the sun, Earth and moon are always on one side, with the sunshield acting as an umbrella to shade the telescope mirrors and instruments from the warmer spacecraft electronics and the sun.

Northrop Grumman subcontractor NeXolve is currently manufacturing the flight sunshield layers at their facilities in Huntsville, Ala. The five flight layers will be delivered to Northrop Grumman in 2016, when extensive testing will continue, followed by integration with the entire observatory. Learn more here http://www.nasa.gov/content/james-webb-space-telescope-sunshield-test-unfolds-seamlessly/#.VDIqmr6Pjzc