A RIFL2E Shot From Canada For AISR + SATCOM

[SatNews] Modern imaging and search sensors have a big data problem—they produce more information than can be practically transmitted and analyzed for the development of actionable intelligence and pilots often have to fly within range of a traditional line-of-sight data link to transfer their surveillance data.

Operators must be able to access intelligence data quickly enough so that it remains actionable. The goal of the Radar and Imaging for the Land/Littoral Environments (RIFL2E) Technology Demonstration Project (TDP) was to demonstrate the technical feasibility and operational utility of an airborne surveillance platform that is capable of sending data to ground stations over a satellite communications network. The platform also needed to be interoperable with NATO protocols and formats, and the NATO Multi-sensor Aerospace-ground Joint Intelligence, Surveillance and Reconnaissance (ISR) Interoperability Coalition (MAJIIC) Shared Database (CSD). 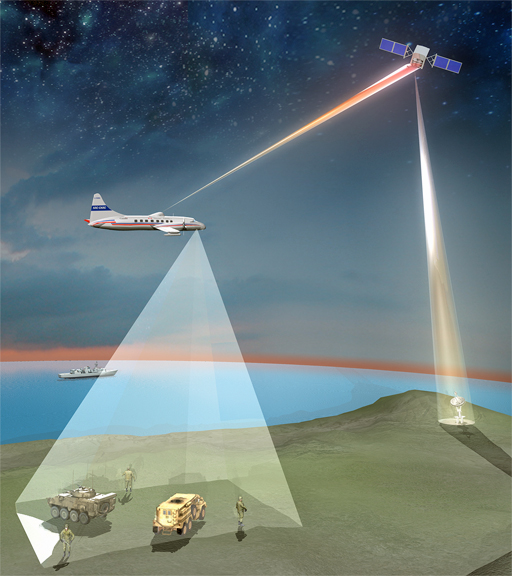 Image is courtesy of DRDC.

“The big data challenge is three-fold,” said Anthony Damini, a Defence Research and Development Canada (DRDC) Defence Scientist and the RIFL2E project lead. “When dealing with such high data rates, the transmission, storage and processing of the data into actionable intelligence all need to be taken into account.” DRDC’s specialized sensors are capable of producing in excess of 300 Gigabytes per hour of sensor data, far too much information to be analyzed manually.

By performing onboard processing and applying metadata to the imagery files and storing them in a database, the information does not need to be catalogued manually by operators, as was required in the past (which was an incredibly time-intensive task). Operators can now search for the data they need, based on metadata values like location. “Emerging sensors are expected to produce in the tens of Terabytes per hour, making the RIFL2E solution ever more valuable for future Force development,” added Damini.

The RIFL2E project demonstrated that sensors producing high bandwidth data can be efficiently exploited using currently available and emerging technology to connect and share intelligence. The advantages of the RIFL2E architecture were demonstrated in several trials, which included the transfer and exploitation of large amounts of radar sensor data and high quality streaming imagery. The trials demonstrated that when satellite communications are used along with intelligent information management there is no need for an aircraft to land and have the sensor data physically transferred to a network, or fly to within the range of a Line-of-Sight data link. This greatly simplifies deployment of airborne surveillance assets like the CP-140 Aurora and minimizes mission preparation time as ground entry stations are not needed for remote locations. All users on the network can publish and subscribe to sensor data using the CSD. Further, they always know what data is available from metadata characteristics. The RIFL2E project encompassed several demonstrations including participation in both Operation Nanook and Atlantic maritime trials.

“This project demonstrated high-bandwidth communications between an ISR airplane and the Wideband Global SATCOM network,” said Jean-Francois Rivest, DRDC’s Director Science and Technology Air. “This was the first time in Canada that we achieved such large data rates, so far north. We were able to stream real-time, encrypted video and perform large, seamless database access from the difficult conditions of the North.”

The final RIFL2E flight was a VIP demonstration conducted on June 12, 2014, for the Royal Canadian Air Force (RCAF) Deputy Commander, Major General Foster. The data was received at the National Defence Headquarters and viewed using two workstations equipped with the Sensor Command and Control Planning Suite (SC2PS), a tool developed by the Canadian Army. The flight was the result of a direct request from the Directorate of Air Domain Development. Surveillance of the Canadian Forces Base (CFB) Trenton airfield was performed and sensor data was sent from the aircraft directly to the workstations via the Wideband Global SATCOM system (WGS) 3 satellite.

The RIFL2E project successfully demonstrated the utility of currently available and emerging connectivity and dissemination technologies for the exploitation of high bandwidth sensors in the context of airborne ISR.

The Defence Research and Development Canada infosite is located at http://www.drdc-rddc.gc.ca/en/index.page