[SatNews] ...integrate a total of 81 satellites for the constellation, including 66 low-Earth orbit operational satellites, six in-orbit spares, and nine ground-backup spacecraft—in the next three years. 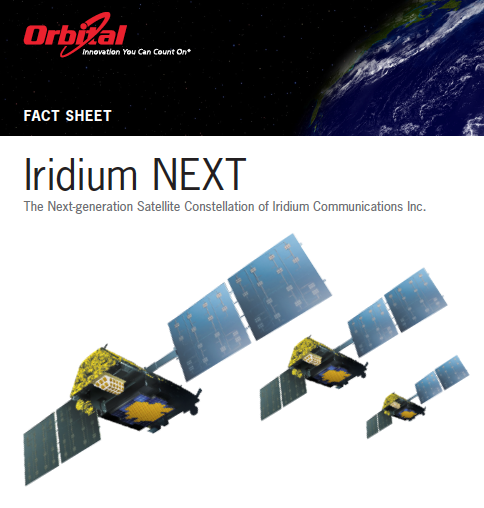 Orbital Sciences Corporation (NYSE: ORB) announced that it has started production of 81 satellites for the Iridium NEXT program as part of a contract between Orbital and Iridium’s prime contractor, French-Italian aerospace company Thales Alenia Space. Orbital will complete the assembly, integration, test and launch support phases for this second-generation global communications satellite constellation at its satellite manufacturing facility in Gilbert, Arizona. The commencement of production also signifies the opening of a Foreign Trade Zone (FTZ) at the Gilbert facility, which allows Orbital to reduce program costs by importing foreign-sourced hardware from Thales Alenia Space.

“Ten years ago, this factory was created with large scale production in mind,” said Jason Yocum, Orbital’s Senior Program Director for the Iridium NEXT production program. “Today, at the Gilbert facility, we produce cutting-edge satellites that are executed with the highest degree of excellence and professionalism. As always, we appreciate the support we have received from the Town of Gilbert as we begin to use this unique facility for its intended purpose – as an international high-rate satellite production factory.”

Orbital worked closely with the town of Gilbert to develop the new FTZ, enabling the company to develop a highly efficient satellite production line. Orbital will integrate a total of 81 satellites for the constellation, including 66 low-Earth orbit operational satellites, six in-orbit spares, and nine ground-backup spacecraft, over the next three years. Orbital’s responsibilities also include ground support equipment, primary and hosted payload integration, shipment and launch integration services.

“We thank Orbital for their partnership and cooperation in creating Gilbert’s first Foreign Trade Zone,” said John Lewis, Mayor of Gilbert, Arizona. “It takes a tremendous amount of effort to prepare for a project of this magnitude and we are excited for this international effort to be happening here in Gilbert.”

Scheduled to begin launching in 2015, Iridium NEXT will fully replace Iridium’s current satellite constellation of 66 cross-linked low-Earth orbit (LEO) satellites that cover 100 percent of the globe. It will dramatically enhance Iridium’s ability to meet the rapidly-expanding demand for truly global mobile communications on land, at sea and in the skies.

“Over the past three years, our teams have been working diligently to produce the best-designed satellite and to validate that design in preparation for production,” said Scott Smith, Chief Operating Officer, Iridium Communications Inc. “Team members from all over the world have been working together to challenge the processes, build hardware for validation testing and work to make this process as efficient as possible. All of this hard work has paid off and we look forward to a steady production of high quality satellites for our new network from this facility.”

Orbital had a  ribbon cutting ceremony to announce the start of production for 81 satellites for the Iridium NEXT program, the second-generation global satellite constellation. This new constellation will dramatically enhance Iridium's ability to meet the rapidly-expanding demand for truly global mobile communications on land, at sea and in the skies. Orbital will perform assembly, integration, test, and launch operations of the satellites under contract agreement with Thales Alenia Space of France, Iridium’s prime contractor. The start of production also signifies the opening of the newly created Foreign Trade Zone at the Orbital Sciences manufacturing facility in Gilbert, Arizona.

In addition to viewing the Iridium NEXT production line, visitors will be able to see NASA’s Orbiting Carbon Observatory-2 (OCO-2) satellite, currently in its final integration and testing phase, and Orbital will provide an update on the program.

Highlights of the event will include:

Iridium® is the only mobile voice and data satellite communications network that spans the entire globe that enables connections between people, organizations and assets to and from anywhere, in real time. Together with its ecosystem of partner companies, Iridium delivers an innovative and rich portfolio of reliable solutions for markets that require truly global communications. The company has a major development program underway for its next-generation network – Iridium NEXT. Iridium Communications Inc. is headquartered in McLean, VA, U.S.A., and its common stock trades on the NASDAQ Global Select Market under the ticker symbol IRDM. For more information about Iridium products, services and partner solutions, visit.

Thales Alenia Space, a joint venture between Thales (67 percent) and Finmeccanica (33 percent), is a key European player in space telecommunications, navigation, Earth observation, exploration and orbital infrastructures. Thales Alenia Space and Telespazio form the two parent companies’ “Space Alliance,” which offers a complete range of services and solutions. Because of its unrivaled expertise in dual (civil/military) missions, constellations, flexible payloads, altimetry, meteorology and high-resolution optical and radar instruments, Thales Alenia Space is the natural partner to countries that want to expand their space program. The company posted consolidated revenues in excess of 2 billion euros in 2013, and has 7,500 employees in six countries.

Orbital develops and manufactures small- and medium-class rockets and space systems for commercial, military and civil government customers. The company’s primary products are satellites and launch vehicles, including low-Earth orbit, geosynchronous-Earth orbit and planetary spacecraft for communications, remote sensing, scientific and defense missions; human-rated space systems for Earth-orbit, lunar and other missions; ground- and air-launched rockets that deliver satellites into orbit; and missile defense systems that are used as interceptor and target vehicles. Orbital also provides satellite subsystems and space-related technical services to government agencies and laboratories. More information about Orbital can be found at.