New hope is in a Russian built satellite and rocket to launch in November that hopefully will provide intelligence for Egypt regarding breaches of their border from Libya and Sudan... The Egyptian Army has a particular challenge in controlling the 1,200km border with Libya because of unrest in the country and links between militant groups active in Libya and those in Egypt’s Sinai Peninsula. 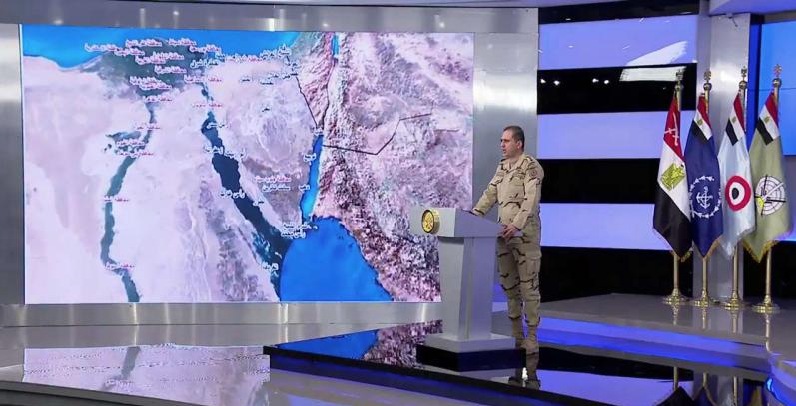 The satellite, built by the Russian national rocket and space corporation Energia and expected to be launched November 22 from Russia’s Baikonur Cosmodrome in Kazakhstan, will provide important images and data about border areas.

“The images will show what is happening on the borders very clearly,” said Mahmoud Hussein, chairman of the Egyptian National Authority for Remote Sensing and Space Sciences, the national space agency. “This is why these images will be very useful on many counts.”

Egypt has been trying to better monitor its borders with Libya and Sudan to respond to infiltrations. The Egyptian Army has a particular challenge in controlling the 1,200km border with Libya because of unrest in the country and links between militant groups active in Libya and those in Egypt’s Sinai Peninsula.

The border has turned into a hotspot for smuggling arms, explosives and militants into Egypt from Libya since the uprising that ended the rule of autocrat Muammar Qaddafi in 2011. These arms are believed to be finding their way to Islamic State militants, who are fighting the Egyptian Army in Sinai.

In January, Egyptian President Abdel Fattah al-Sisi said the Egyptian Army deployed additional troops along the border with Libya to prevent militants from infiltrating into Egypt. Cairo opened a major military base in El-Hamam in the western desert last year to provide greater security along its western border.

Despite this, intelligence suggests that arms, explosives and militants continue to be smuggled into Egypt from Libya, posing a major national security threat.

In October 2017, Sisi said the Egyptian Air Force had destroyed more than 1,200 trucks carrying arms and explosives that were headed towards the country via Libya in the previous two-and-a-half years.

The border with Sudan is no less dangerous because it has developed into a thriving area for illegal smuggling, including arms, drugs and human-trafficking.

“This is a process that requires the utilization of modern border control equipment,” said retired army General Sameh Abu Hashima. “Egypt is in a volatile area and this makes border control a daunting mission.”

The new $100 million satellite, called EgyptSat A, is the second attempt by Cairo to use space technology in controlling its borders. In April 2014, Egypt launched the Russian-made EgyptSat 2, with the same objective but lost contact with the $45 million satellite in 2015 in a national scandal.

The satellites are part of the Egyptian space program, which is a by-product of strengthening relations between Cairo and Moscow.

EgyptSat A, the Egyptian National Authority for Remote Sensing and Space Sciences said, was to start transmitting images of the border areas as of January 2019.

This is not only about border control, the authority said. The satellite is to play a major role in helping Egypt move ahead with its development plans.

“The satellite has development purposes by locating subterranean water and places that are fit for agriculture,” Hussein said. “It will help national agencies better draw up the borders of the various provinces and formulate urban expansion plans.”

By tightening border control, Egypt will overcome a major challenge to its security. Terrorists entering Egypt from Libya killed 16 policemen and wounded 13 others in an ambush in the Western Desert last October 20.

The only surviving member of the terrorist cell, a Libyan national, confirmed that he and his colleagues entered Egypt from Libya and spent days in the desert before the attack.

“The presence of an advanced reconnaissance satellite will help the security establishment detect such infiltrations easily,” said Khaled Okasha, a member of the Supreme Anti-Terrorism Council, an advisory body of the Egyptian presidency. “The utilization of space technology is indispensable if we hope to overcome threats to our security.”