[SatNews] Recent news of a low cost airline in Asia selecting in-flight connectivity (IFC) via satellite begs the question: is this a clear signal the market is transitioning from nascent to mainstream?  And, more importantly, are ROI calculations now positive enough to ensure profitability for airline carriers?

In June 2014, Global Eagle Entertainment, Thaicom, and Hughes Network Systems announced that they have been selected to equip Nok Air, Thailand’s premium low cost airline, with satellite-based connectivity and content services across its entire fleet.  This is a first for a Southeast Asian carrier with plans to further develop, implement and support inflight connectivity solutions for airlines in Thailand and across Southeast Asia.

The announcement is noteworthy for a number of reasons: 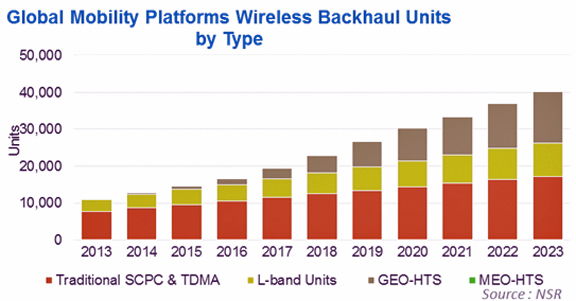 WiFi and other wireless services aboard commercial aircraft for short-haul and long-haul flights will have to be made available to a growing mobile workforce that has to remain connected to the corporate intranet virtually at all times. The mobile worker at downtime as well as the leisure market will likewise have to be entertained through the availability or access to social media, Youtube and other portals and applications on the Cloud. As such, NSR expects many other contract announcements to take place that replicate the Nok Air deal in other developing regions of the globe.

A final point worth noting is that, the Thaicom capacity to be used for Nok Air will be Traditional FSS Ku-band capacity and not iPSTAR since certain iPSTAR capacity in Thailand is not available.  NSR has always contended that unlike Wireless Backhaul on Fixed Land-based Towers where there is likely to be a clear transition from Traditional FSS capacity to HTS, Wireless Backhaul for Mobility Platforms will be a battleground for Traditional FSS and HTS capacity.  This latest contract announcement certainly validates the argument where elements such as availability, coverage and other technical and commercial conditions will be key elements in the solution mix.