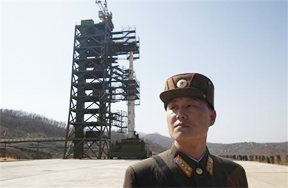 North Korean officials have threatened to launch a satellite-tipped rocket into space sometime this month. Locklear, Pacom's commander, said such a move would violate United Nations Security Council resolutions. "We encourage the leadership in North Korea to consider what they are doing here and the implications on the overall security environment on the Korean Peninsula, as well as in Asia," Locklear said during a Pentagon news conference. The move would be similar to what the nation would do to launch an intercontinental ballistic missile. North Korea has been pursuing nuclear technology in defiance of the international community and has claimed to have carried out several tests of nuclear devices. Launching the rocket could show that North Korea has a delivery system for a nuclear weapon. "And this ... would be very destabilizing ... not only to the region but to the international security environment," Locklear said.

Locklear's priority—like that of all U.S. commanders—is the defense of the United States. As such, he is watching North Korean preparations carefully and talking with friends and allies in the region. The command has moved U.S. Navy ships in place to achieve optimal monitoring of the threatened launch. This is also important because Pacom has a homeland defense mission for Guam, the Marianas islands and other states in Oceana.