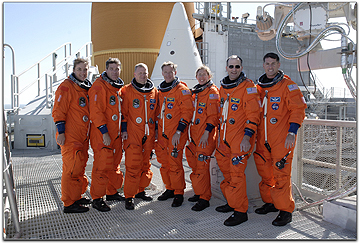 The crew of STS-126 wrapped up three days of intense training at NASA’s Kennedy Space Center with a full countdown dress rehearsal Wednesday morning before heading back to Johnson Space Center in Houston in the afternoon. Stefanyshyn-Piper will work as mission specialists during STS-126. Magnus will serve as a long-duration crew member on the International Space Station after Endeavour leaves the station during the mission. The team of seven astronauts, targeted to launch aboard space shuttle Endeavour on November 14 at 7:55 p.m. EST, took their assigned seats in the shuttle during the standard countdown simulation. They spent about three hours running through the same procedures they will use on launch day. NASA officials conducted an exhaustive review of the shuttle, its payload and the International Space Station. The officials met Thursday during the Flight Readiness Review, a standard session that clears the way for the launch of a shuttle mission. Photo credit: NASA/Kim Shiflett

The practice included launch and mission controllers at Kennedy and Johnson, along with scores of workers and technicians practicing their own launch roles. The crew will fly to Kennedy Space Center again four days before the targeted launch date to begin the real countdown. Endeavour and the astronauts are to deliver a host of new equipment to the International Space Station during STS-126.

The cargo module Leonardo has been loaded with 19,000 pounds of equipment and supplies that will eventually allow six people to live inside the orbiting laboratory. Leonardo will be lifted out of Endeavour’s payload bay and attached to the station while astronauts transfer the gear. Near the end of the flight, Leonardo will be returned to Endeavour’s cargo bay for the trip back to Earth.

Agency officials evaluated the processing of Endeavour and its payload including the cargo module Leonardo before giving the go to set the launch date. Endeavour and its crew of seven astronauts are to deliver 14,500 pounds of supplies and equipment packed inside Leonardo to the International Space Station.

Leonardo acts as NASA’s moving van. It will be connected to the station while astronauts and station crew members transfer the gear into the orbiting laboratory. They will also transfer used equipment and completed experiments into Leonardo for return to Earth. The module will be disconnected and will fly back inside Endeavour. 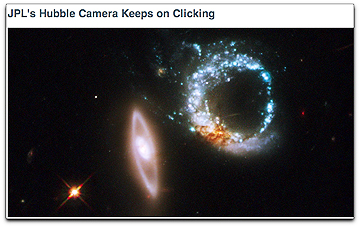 Separately, NASA managers have announced that they will not meet a February 2009 launch date for the fifth and final shuttle mission to the Hubble Space Telescope. The decision comes after engineers completed assessments of the work needed to get a second data handling unit for the telescope ready to fly. The unit will replace one that failed on Hubble in late September, causing the agency to postpone the servicing mission, which had been targeted for October 14. Image Credit: NASA/JPL/UA/Lockheed Martin

"We now have done enough analysis of all the things that need to happen with the flight spare unit to know that we cannot be ready for a February launch," said NASA's Astrophysics Division Director Jon Morse at NASA Headquarters in Washington. "The February date was an initial estimate, assuming minimal hardware preparations and test durations that are no longer viewed as realistic. We've communicated our assessment to the Space Shuttle Program so it can adjust near-term plans. We will work closely with the Shuttle Program to develop details for a new launch opportunity."
Topical Tags :
Agencies
Regulatory/Government
Launch
Regional Tags :
North America
Global