At a mountaintop event in New Mexico on October 18th, DARPA is marking the formal transition of the Space Surveillance Telescope (SST) from an Agency-led design and construction program to ownership and operation by US Air Force Space Command (AFSPC), which has announced plans to operate the telescope in Australia jointly with the Australian government. 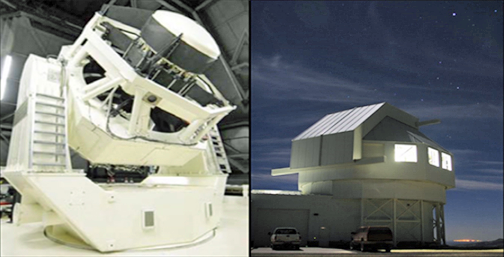 SST has moved space situational awareness from seeing only a few large objects at a time through the equivalent of a drinking straw, to a “windshield” view with 10,000 objects at a time, each as small as a softball. SST can search an area larger than the continental United States in seconds and survey the entire geosynchronous belt within its field of view—one quarter of the sky—multiple times in one night.

However, of broader technical significance is that SST has developed many technological firsts that are helping redefine what telescopes can do. For example, SST uses the most steeply curved primary telescope mirror ever made. This mirror enables SST to collect more light to see images across a wider field of view than any other space surveillance telescope. To hold this mirror, SST uses an innovative Mersenne-Schmidt design, which enables much more compact construction than traditional telescopes. In fact, SST is the largest telescope ever to use this design, which has also made it the quickest and most nimble large telescope in the world.

SST’s camera includes its own noteworthy inventions. SST developed the first-ever curved charge-coupled device, or CCD, to provide clear imagery across its wide field of view because current digital cameras with flat CCDs are unable to record images from such highly curved mirrors without distortion. The camera has the fastest telescope camera shutter in the world and is able to take thousands of pictures a night. In recent months, and in preparation for SST’s move to Australia, DARPA has upgraded its camera, faint-object detection algorithms, and search speed to make it even more effective.

SST’s wide-open eye on the sky sees objects around the Earth as well as in the solar system and universe beyond. NASA is already leveraging SST’s capabilities to see very faint objects in a wide field of view to help provide warning of asteroids and other near-Earth objects. With 2.2 million asteroid observations in 2014, 7.2 million in 2015, and hopes for 10 million in 2016, SST has become the most prolific tool for asteroid observation in the world. SST has also discovered 3,600 new asteroids and 69 near-Earth objects, including four that carry a risk of possibly hitting the Earth.

“With its amazing capabilities, SST joins a prestigious list stretching back decades of game-changing space situational awareness programs on which DARPA and AFSPC have collaborated,” said Brad Tousley, director of DARPA’s Tactical Technology Office, which oversees SST. “DARPA looks forward to seeing what the Air Force will do with SST, and we will continue to work with them as DARPA pushes the technological envelope on space situational awareness with our Hallmark and OrbitOutlook programs.”

Australia offers a uniquely beneficial vantage point for operational testing and demonstration of SST’s capabilities. From its new home, SST will provide key space situational awareness information from the southern hemisphere—an area of the geosynchronous belt that is currently sparsely observed—to the US Space Surveillance Network that AFSPC operates. SST will also continue to provide NASA and the scientific community with surveillance data on transient events such as supernovas, as well as potentially hazardous near-Earth asteroids.

According to Lindsay Millard, DARPA program manager for SST, by enabling much faster discovery and tracking of previously unseen or hard-to-find small space objects, this optical telescope is poised to revolutionize space situational awareness and help prevent potential collisions with satellites or the Earth itself.