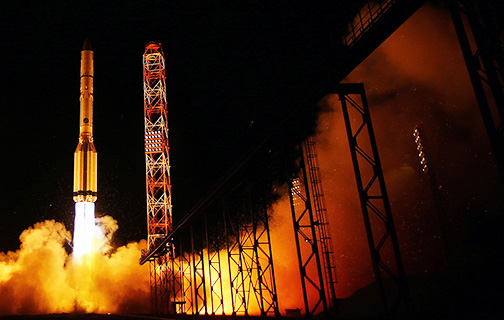 The launch of a Blagovest satellite. Photo is courtesy of Peter Kovalev/TASS.

The space system for military communications — Blagovest — will be completed in mid-July when the fourth satellite is launched, a source in the space rocket industry told TASS.

"The Blagovest satellite will be launched on July 16 even though the launch was initially planned for the end of May. After the satellite is delivered to the orbit, the orbital group of military communications satellites Blagovest will be completed," the source said.

The satellite will be launched from the Baikonur spaceport via a Proton-M carrier rocket.

Earlier reports said that the launch of the fourth Blagovest satellite was planned for the first quarter of 2019 but was later postponed to the first week of April. The previous three Blagovest satellites were launched from the Baikonur spaceport in August 2017, April 2018 and December 2018, respectively. Blagovest is a Russian religious term meaning "good news."