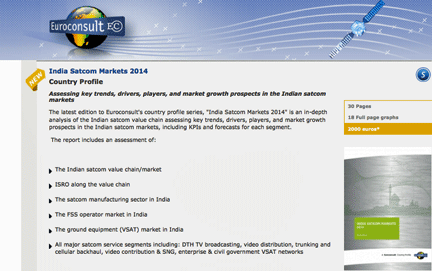 The SATCOM value chain is strongly influenced by the Indian Space and Research Organization (ISRO) that is present all along the SATCOM value chain including for satellite manufacturing, launch, satellite operations, regulations and partially for services. On the manufacturing level, roughly half of the country's satellite manufacturing sector spending is currently dedicated to developing communications satellites. "While ISRO dominates the satcom manufacturing landscape, outsourcing to foreign and national companies will continue to provide growth opportunities for a number of players with hundreds of millions of dollars to be outsourced from 2013-2021," said Deepu Krishnan, Senior Consultant at Euroconsult.

While domestic operator ISRO/Antrix enjoys significant regulatory advantages in the market, only a proportion of the commercial demand for satellite capacity is being met by domestic capacity today, with the majority being provided by foreign satellite operators. Regulatory barriers and capacity supply constraints still challenge market growth.

"Changes in the country's SATCOM policy, which is expected to be released in 2014, should bring positive changes and contribute to additional growth in SATCOM markets over the coming years, in particular for services using Ku-band capacity from foreign operators," said Krishnan. In total, demand for regular C- and Ku-band capacity is expected to grow at 6 percent p.a. between 2013 and 2023 in addition to new demand for SATCOM services using HTS systems that should see strong take up towards the end of the decade.

The latest addition to Euroconsult's country profile series, "India Satcom Markets 2014" is an in-depth analysis of the Indian satellite communications value chain assessing key trends, drivers, players, and market growth prospects in the Indian SATCOM markets, including KPIs and forecasts for each segment.