[SatNews] The men and women of the 55th Strategic Communications Squadron recently learned that their dedication to excellence was about to be awarded with the Defense Information Systems Agency's (DISA) top award.

With 11 categories, each offering a different type of support, the 55th SCS won the Category IX, Defense Satellite Communications System and Wideband Global Satellite Earth Terminal Facility of the Year for 2013. The global award is DISA's top-level award across all services.

"I am actually not surprised with this award to the DSCS Facility team," said Col. Jeffrey Granger, 55th Communications Group commander. "They are one of the most focused, organized, compliance driven work centers I've ever encountered. They know their mission, their customers, and their jobs to amazing breadth and depth. This award validates their sustained excellence." 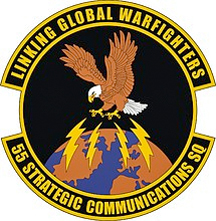 The Offutt Earth Terminal Facility houses two DSCS terminals. These terminals take user data (telephone, computer, etc.), process it and send it to the satellite for reception at another earth terminal in any area of the earth the satellite can see. As it turns out, the DISA Facility of the Year Award Category IX is not the only top-level award the 55th SCS has been awarded for 2013. The 55th SCS also just found out that their High Frequency Global Communication System also won the Outstanding Global Information Grid Facility or Category VIII Global Award for 2013. The High Frequency radio system is a three-site HF communication system at two locations that permits point-to-point and ground-to-air-to-ground communications by voice, continuous wave and data. Three separate sites control, transmit and receive up to 14 four kilowatt solid state radio transmitters, 18 radio receivers and associated equipment.

If you look at the list of accomplishments for the 55th SCS, their recent accolades should be no surprise. One item that stands out on their list of major accomplishments is how they have a 99.99 percent uptime rate for the past 104 months on two Earth terminals and 99.99 percent availability rate at 13 high frequency sites worldwide.

The mission of the 55th SCS is to provide real-time, secure, nuclear survivable missile warning and command, control and communications capabilities in support of DoD, U.S. Strategic Command and the 55th Wing.

"This capability is vital to our national-level command and control and nuclear command and control, and the team excels at this no-fail mission. It has been amazing to watch technologies and processes for Global High Frequency shrink what was a detachment of 150 Airmen...to a small team of a dozen Airmen - with no reduction in quality of service," Col. Granger said. "It took this team, with their skills, compliance, and commitment to make this transition so successful. These awards recognize the best capability providers globally and the 55th SCS continues to excel in all aspects of their critical global missions - and their global customers and our nation's leadership reap the benefits."