SpeQtral has now accepted the operations of the SpooQy-1 smallsat on behalf of the Centre for Quantum Technologies (CQT) at the National University of Singapore.

SpooQy-1 is a shoebox-sized, 3U cubesat hosting a quantum payload developed at CQT. The smallsat was launched April of 2019 and then deployed from the International Space Station on June 17, 2019. The quantum payload is the world’s first entangled photon source compact enough to fit on a smallsat and qualified for the harsh space environment.

The primary objective of the SpooQy-1 mission is to produce and characterize entangled photon pairs in space such that they violate the CHSH (Clauser-Horne-Shimony-Holt) Bell’s inequality. This is a core capability for future quantum communication networks. The CQT team is analyzing scientific data from the mission and expects to publish results on the source’s performance in 2020. 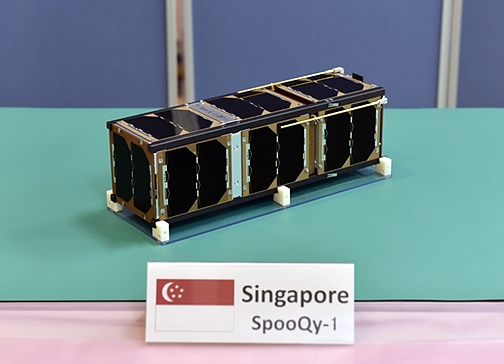 In the meantime, CQT and SpeQtral have signed an agreement allowing SpeQtral to manage ongoing operations. Formed as a spin-out company to commercialize quantum communications technologies developed at CQT, SpeQtral will monitor the long-term performance of the quantum payload for radiation damage and other degradation effects in the space environment. This information will help guide the development of long-lived quantum systems in space, necessary for the commercial deployment of space-based QKD systems.

Artur Ekert, Director of CQT, said establishing a partnership for the SpooQy mission plays to all of the firm's strengths: at the Centre for Quantum Technologies, the organization will concentrate on scientific objectives, while SpeQtral focuses on commercial applications.

Additional information is available at this infolink...