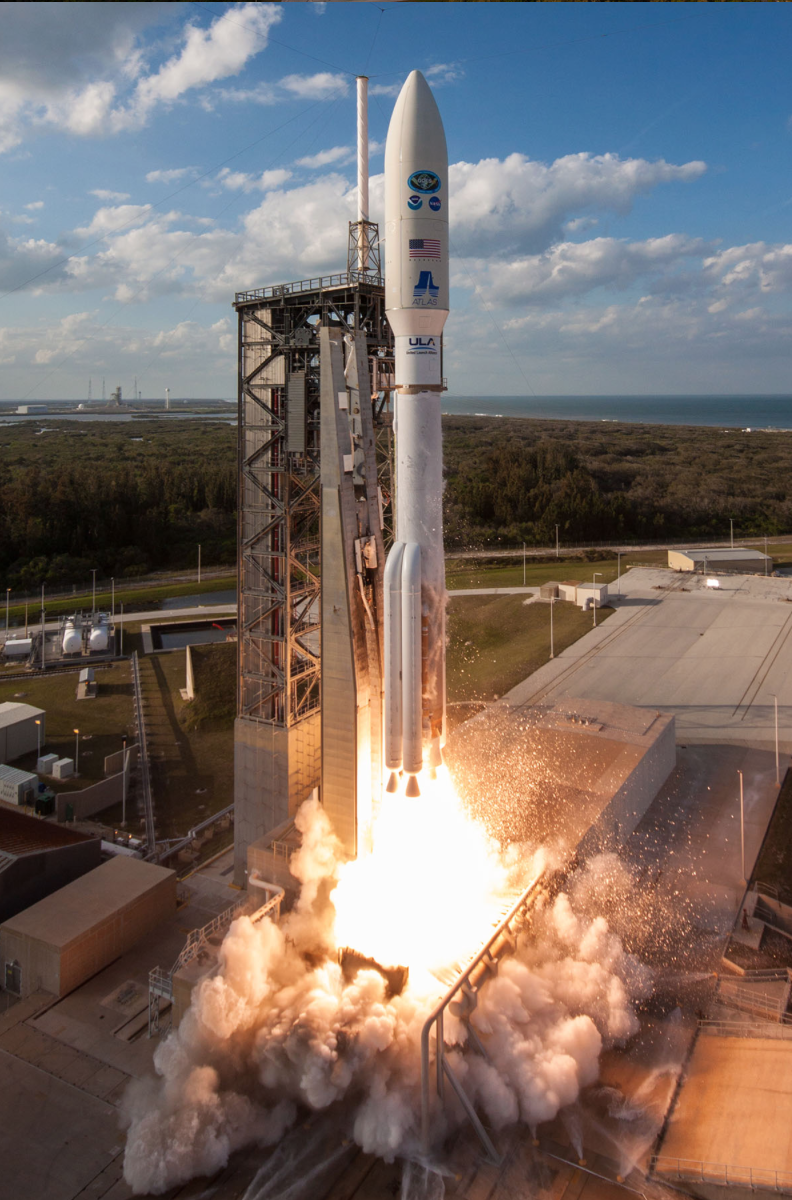 Shortly thereafter, NASA Flight Commentator Marty Malinowski announced that the satellite had made it into space saying, “We have a good faring jettison, exposing the GOES-S to space for the first time.”

Once the satellite is in orbit, GOES-S will have a name change to GOES-17, and will join the GOES-16 satellite that launched in 2016 to create a powerful tandem that will inform weather forecasters using data it captures.

GOES-S will be operated from a vantage point  22,300 miles above Earth to cover the western United States, Alaska and Hawaii, providing unprecedented advancements in the clarity and  timeliness of observations over the region. The satellite’s instruments will collect vivid imagery every 30 seconds and detailed atmospheric measurements to monitor weather patterns and severe storms. Once operational, the satellite will be renamed GOES-West to track storm systems, lightning, wildfires, dense fog and other hazards that threaten the western U.S.

It will work in tandem with the GOES-R satellite that was successfully launched by an Atlas V on November 19, 2016, and now operates as the GOES- East observatory. 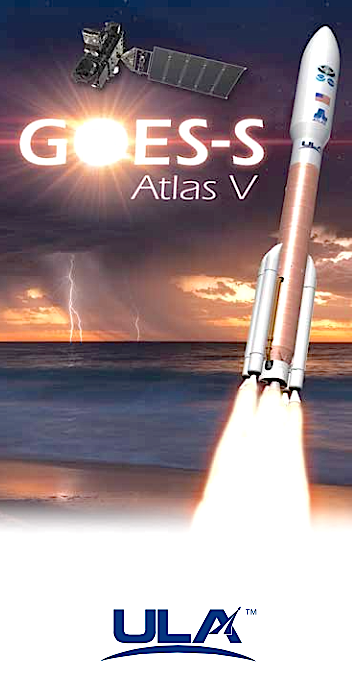 “Thank you to our partners at NASA and NOAA for the outstanding teamwork, as we delivered this next-generation satellite to orbit,” said Gary Wentz, ULA vice president of Government and Commercial Programs. “We are proud to serve as the ultimate launch provider, continuing our dedication to 100 percent mission success.”

GOES-S will be operated from a vantage point 22,300 miles above Earth to cover the western United States, Alaska and Hawaii, providing unprecedented advancements in the clarity and timeliness of observations over the region. It will work in tandem with the GOES-R satellite that was successfully launched by an Atlas V rocket on Nov. 19, 2016. The next-generation GOES-R series scans the Earth five times faster at four times the image resolution, with triple the number of data channels than previous GOES satellites for more reliable forecasts.

This mission was launched aboard an Atlas V Evolved Expendable Launch Vehicle (EELV) 541 configuration, which includes a 5-meter payload fairing. The Atlas booster for this mission was powered by the RD AMROSS RD-180 engine. Aerojet Rocketdyne provided the four AJ-60A solid rocket boosters and the RL10C-1 engine for the Centaur upper stage.

This is the 76th launch of the Atlas V rocket, ULA’s 3rd launch in 2018 and the 126th  successful launch since the company was formed in December 2006.

ULA's next launch is the AFSPC-11 mission for the U.S. Air Force on an Atlas V rocket from Space Launch Complex-41 at Cape Canaveral Air Force Station, Florida.

With more than a century of combined heritage, United Launch Alliance is the Nation’s most experienced and reliable launch service provider. ULA has successfully delivered more than 125 satellites to orbit that aid meteorologists in tracking severe weather, unlock the mysteries of our solar system, provide critical capabilities for troops in the field and enable personal device-based GPS navigation. END of ULA's Announcement 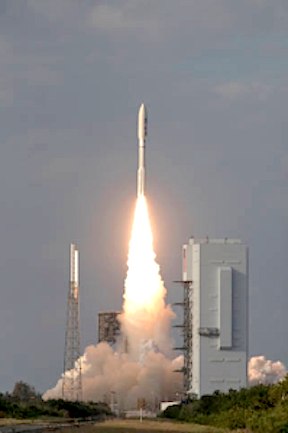 NASA successfully launched the second in a series of next-generation weather satellites for the National Oceanic and Atmospheric Administration (NOAA) at 5:02 p.m. EST Thursday.

GOES-S mission managers confirmed at 8:58 p.m. the spacecraft’s solar arrays successfully deployed and the spacecraft was operating on its own power.

The satellite will provide faster, more accurate and more detailed data, in near real-time, to track storm systems, lightning, wildfires, coastal fog and other hazards that affect the western United States.

“We at NASA Science are proud to support our joint agency partner NOAA on today’s launch of GOES-S, a national asset that will impact lives across the Western Hemisphere each and every day,” said Thomas Zurbuchen, NASA associate administrator for science, who attended today’s launch.

Once GOES-S is positioned in a geostationary orbit 22,300 miles above Earth, in approximately two weeks, it will be renamed GOES-17. Later this year, after undergoing a full checkout and validation of its six high-tech instruments, the new satellite will move to the GOES-West position and become operational. From there, it constantly will provide advanced imagery and atmospheric measurements, real-time mapping of lightning activity, and improved monitoring of solar activity and space weather.

In addition to improving weather forecasts, GOES-17 will help forecasters locate and track wildfires – invaluable information that emergency response teams need to fight fires and evacuate people out of harm’s way. GOES-17 also will be an important tool for forecasters to track and predict the formation and dissipation of fog, which can disrupt airport operations.

GOES-17 will work in tandem with GOES-16, the first satellite in NOAA’s new geostationary series, now at the GOES-East position. GOES-17 will extend observational high-resolution satellite coverage of the revolutionary new technology aboard GOES-16 to most of the Western Hemisphere, from the west coast of Africa to New Zealand, and from near the Arctic Circle to near the Antarctic Circle. The satellite will provide more and better data than is currently available over the northeastern Pacific Ocean, the birthplace of many weather systems that affect the continental U.S.

NOAA manages the GOES-R Series program through an integrated NOAA/NASA office at NASA’s Goddard Space Flight Center in Greenbelt, Maryland. NASA also oversees the acquisition of the spacecraft, instruments and launch vehicles. Lockheed Martin Space of Littleton, Colorado, built the spacecraft and is responsible for spacecraft development, integration and testing.

Mission operations will be performed by NOAA at the NOAA Satellite Operations Facility in Suitland, Maryland. Harris Corp. of Melbourne, Florida, provided the main instrument payload, the Advanced Baseline Imager, and the ground system, which includes the antenna system for data receipt. NASA’s Launch Services Program, based at the agency’s Kennedy Space Center in Florida, is responsible for launch management. ULA of Centennial, Colorado, is the provider of the Atlas V launch service. End NASA's Statement

What GOES Up Will Provide Advanced Weather Forecasting 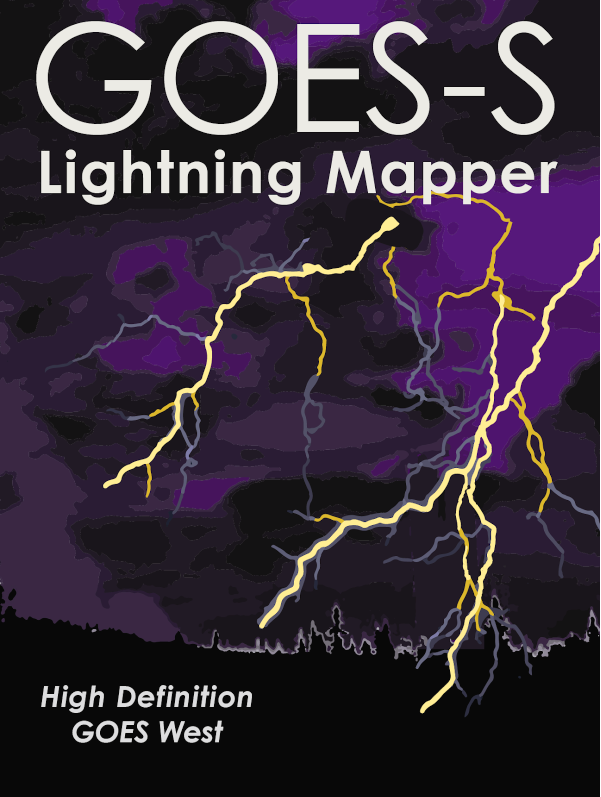 The GOES-16 provides high-definition views of the East Coast while the GOES-17 will do the same for the West Coast. GOES satellites, a collaborative effort between NOAA and NASA to develop, launch and operate the spacecraft, have played a vital role in weather forecasting, storm tracking and meteorological research since the first GOES was launched on a Delta rocket in 1975.

NOAA GOES-S will not only image the Earth as it sees it in true color, it also will be able to detect and monitor weather phenomena as they develop in real time,  such as lightning. The first lightning detector in a geostationary orbit, the Geostationary Lightning Mapper (GLM) currently onboard NOAA GOES East, is transmitting data never before available to forecasters. The mapper continuously looks for lightning flashes in the Western Hemisphere, so forecasters know when a storm is forming, intensifying and becoming more dangerous. Rapid increases of lightning are a signal that a storm is strengthening quickly and could produce severe weather. 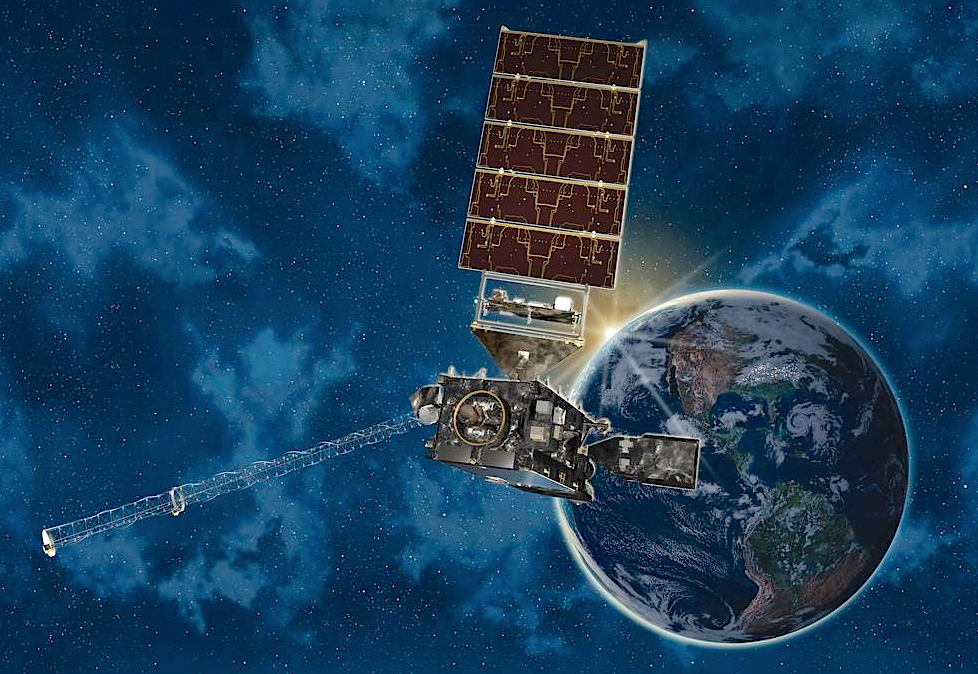 During heavy rain, GLM data will show when thunderstorms are stalled or if they are gathering strength. When combined with radar and other satellite data, GLM data will help forecasters anticipate severe weather and issue flood and flash flood warnings sooner. Also, in large long-lived storm systems, lightning may travel hundreds of miles before striking the ground. The GLM can show forecasters areas far from the main line of storms where the risk of lightning strikes to ground presents a public safety hazard. In dry areas, especially in the western United States, information from the instrument will help forecasters, and ultimately firefighters, identify areas prone to wildfires sparked by lightning.

Data from the instrument is also used to produce a long-term database to track decadal changes in lightning activity. This is important due to lightning’s role in maintaining the electrical balance between Earth and its atmosphere and potential changes in extreme weather and severe storms under a changing climate.

The Advanced Baseline Imager is the primary instrument on the GOES-R Series for imaging Earth’s weather, oceans and environment. ABI views the Earth with 16 different spectral bands (compared to five on the previous generation of GOES), including two visible channels, four near-infrared channels, and ten infrared channels. 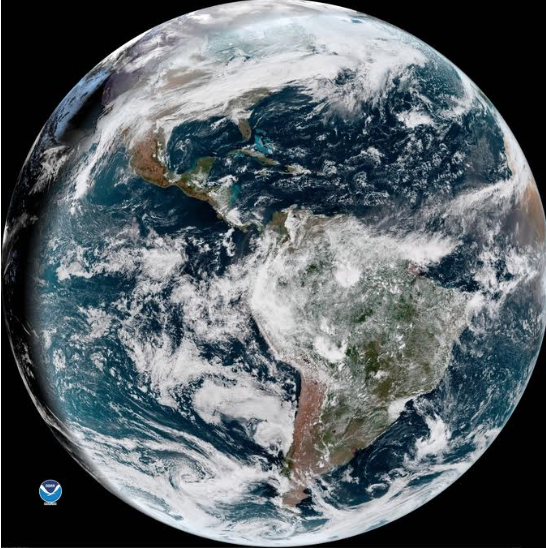 ABI is a multi-channel passive imaging radiometer that observes the Western Hemisphere and provides variable area imagery and radiometric information of Earth’s surface, atmosphere and cloud cover. ABI is used for a wide range of applications related to severe weather, hurricanes, aviation, natural hazards, the atmosphere, oceans and cryosphere.

ABI can multitask. The default scan mode concurrently takes a full disk (Western Hemisphere) image every 15 minutes, an image of the Continental U.S. every five minutes, and two smaller, more detailed images of areas where storm activity is present, every 60 seconds (or one every 30 seconds). Alternatively, ABI can operate in full disk mode, continuously imaging the full disk every five minutes.

By delivering a better and larger suite of weather, climate and environmental products, ABI has ushered in a new era in weather forecasting, benefitting public safety, protection of life and property, and our nation’s economic health and prosperity.