MUOS 5's Anomaly Aggravation For Lockheed Martin & The US Navy 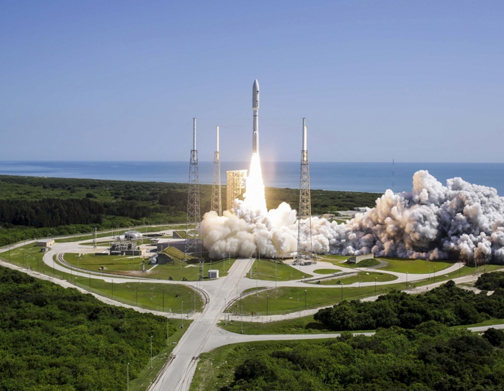 An anomaly is plaguing the US Navy's recently launched MUOS-5 satellite, with that problem remaining in the undisclosed category.

According to the spokesperson for the Space and Naval Warfare Systems Command, Steven Davis, the anomaly has prevented the satellite's transfer to geosynchronous orbit—temporarily—according to the Navy. MUOS-5 is currently riding in a safe, intermediate orbit. The MUOS team is analyzing the predicament and will offer recommendations as to how best to proceed with the satellite once a cause, or causes, has or have been determined.

The Lockheed Martin built MUOS-5 was launched by United Launch Alliance from Florida's Cape Canaveral AFS on June 24th using an Atlas V single RL-10 engine configured launch vehicle with five strap-on boosters. Once the challenge of determining the reason(s) for the problem(s), the move to geosync orbit will occur and the antennas and solar arrays can be deployed prior to the start of on orbit satellite testing.

Mr. Chip Eschenfelder, the Communications Lead, Military Space, Lockheed Martin Systems said, “Nothing is more important to Lockheed Martin than mission success. We are working closely with our Navy customer to determine the cause of the anomaly.”