Scientists from all over the world come to Nome each summer for various research projects. The first wave of studies this season included researchers from the National Aeronautics and Space Administration, or NASA.

“One of the instruments that we deploy has these cameras that point up and point down. And then we put that into the water, and it sinks through the water column.” 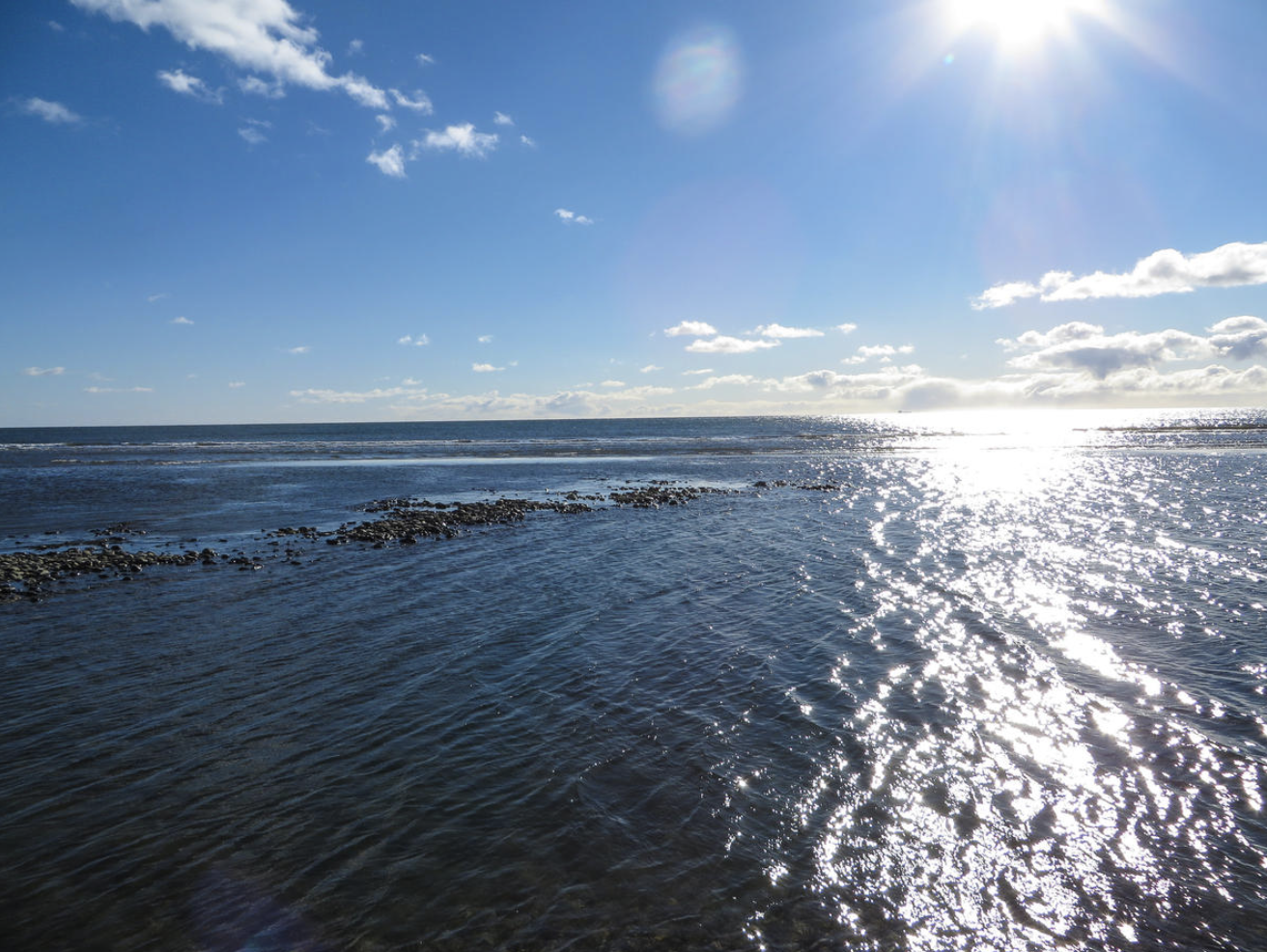 Looking out to the Bering Sea from Nome’s East Beach. (KNOM file photo)

That’s Michael Novak, one of the NASA researchers who recently visited Nome. Novak brought tons of equipment with him — and not all of it even made it to Nome — to do some “ground-truthing,” or in this case ocean-truthing. The idea, Novak says, is to compare what the satellites in the sky are measuring to the water chemistry data that comes from scientists on the ground.

“These satellites have cameras pointing at the ocean, measuring the color, and then we come down and ground-truth it, or ocean-truth it. And then basically what we are measuring is the color of the water, and what color it is can tell you what’s in the water. So if you have a lot of algae, they absorb a lot of the blue part of the spectrum, and therefore, the green becomes what you see. So if you see green water, then you know you have a bunch of algae. And then, on the other side, we measure things like dissolved organic matter and carbon. They have an optical signature where they absorb in red and reflect in yellow.”

While they were in the Norton Sound region, researcher Blake Clark says the NASA team also focused on the Yukon River plume near its southern mouth.

“So there’s this applied aspect of what we’re doing, which is ground-truthing satellites, but then, we’re also doing quite a bit of basic research, which is just trying to figure out how things are happening within the river plume and out into the ocean, and also what’s most important. And the Yukon River itself, believe it or not, is relatively understudied compared to some of the other major Arctic rivers. And the link between that and the rest of the Arctic Ocean and the Bering Sea, it’s more of a long-term research goal.”

Clark says researching what happens in the transition zone between the fresh water Yukon River and the salt water from the Bering Sea can help track what is happening at the bottom of the food chain.

They started studying the plume around 8am on the morning of June 10 and didn’t find salt water until 5pm that same day, 9 hours later, based on their salinity tests.

“I’m not quite sure how they find me. But it was interesting when I got a call from NASA this winter and I was able to say, ‘Hey, I’ve got to take this (call), it’s NASA calling.’”

Nome-ite Adem Boeckmann took the research team more than a hundred miles south, close to Emmonak, where the southern mouth of the Yukon River is located, and through the Norton Sound back to Nome. The researchers and Boeckmann had their trip planned out weeks in advance and executed it starting on June 9 from Nome.

Boeckmann says he enjoyed his time out on the water with the NASA guys, but he was also intrigued by some of their equipment, like a special nitrogen freezer for samples.

“It was an onboard, chemical freezer that would freeze to 100 below zero. So, there was a bunch of cool stuff they had on the boat; I was pretty excited.”

Thanks to Boeckmann, Novak and Clark said they were able to gather even more data than they anticipated. Of course, the sunny, cloud-free weather also helped.

Novak: “There’s nothing more valuable than a perfect, clear sky day and us pushing the button at the same time.”

Clark: “Especially when the satellite is directly overhead, we were able to actually have a couple measurements where the satellite was plus or minus an hour overhead of us.”

Boeckmann also gave the research team some background information about the dramatic changes local residents are currently seeing in the Bering Sea.

Clark believes NASA’s data could eventually be used to explain how the ecosystem is changing, whether from the bottom-up or the top-down.

“Being able to understand how the Earth, or this region, has changed over the last 30-plus years, using things like satellites and models is extremely valuable, because we’ll at least be able to make some sort of informed decisions about how to manage the ecosystem in the future.”

As Novak puts it, the more information researchers from NASA, from the region, or even the world have access to, then the more pieces of the puzzle they have, which then leads to a more complete picture of what is happening in the world’s oceans.

NASA researchers hope to eventually help explain what’s happening in the Bering Sea, and maybe even how erosion is impacting the Yukon River flow, but for now, they don’t have an explanation.

Clark and Novak say the data they gathered from this ground-truthing project will be available online in about a year. To view those results and more information, dating back to the 1990s, from NASA’s Goddard Space Flight Center, go to the NASA Ocean Color website.

Both Clark and Novak also expressed their appreciation and gratitude to the Department of Fish & Game in Nome for giving them information, support, and a place to stay in town during their visit.