Engineering Students Get a Ride From NASA on a Sail ... Funding for CubeSail


For the first time in 13 years, the Satellite Development Student Organization at the University [of Illinois] will be sending a dual-satellite for launching preparation, thanks to a $250,000 funding from NASA. 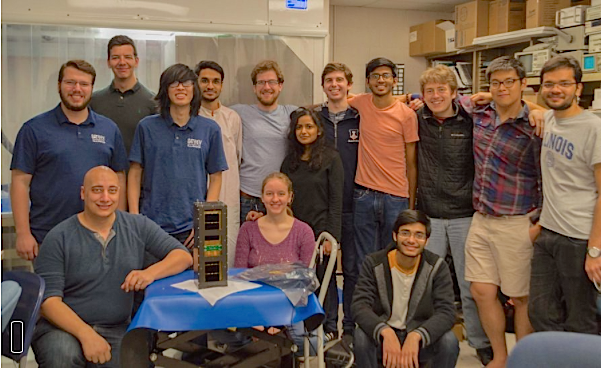 The Command and Data Handling team finished writing final testing code to ensure the satellite was ready by deadline. Photo courtesy of SATDEV.

The satellite, which is called CubeSail, will be delivered to a startup company in California called Rocket Line. Rocket Line will then deliver the CubeSail to New Zealand for launching.

The last satellite sent by SatDev, Ion, was involved in a rocket crash in 2006, said Dillon Hammond, freshman in Engineering, in an email.

The SatDev organization receives grants from the Educational Launch of Nanosatellites and the Undergraduate Student Instrument Project, both through the NASA program, which provide engineering students with a hands-on design, building and testing experience with satellite systems.

“All those (projects) are through the NASA funded programs, whose sole purpose is to give students real-world experience in building satellites and project management and development,” said Jeremy DeJournett, senior in Engineering and head of command for SatDev.

CubeSail is the size of a cereal box, but it will be launched to orbit around the Earth, DeJournett said.

“CubeSail is a technology demonstration; it’s basically to show you can have viable propulsion that is cheap and small in deep space,” he said.

April 12 was the team’s final day working on CubeSail. DeJournett said he spent around 80 hours in the lab in the days leading to the shipment of CubeSail.

There are only six paid positions for the 60 active members of SatDev, so most students work in an unpaid capacity, DeJournett said.

“A lot of kids are just really in love with space, myself included, like I would do it for free. And I kind of like the volunteering aspect of it because it makes me feel like I’m not obligated. I’m not under pressure to do this thing. I’m doing it ’cause I want to do it,” DeJournett said. “And I think that mentality is the one that shares among a lot of people.”

DeJournett said he wants to pass down his knowledge to the next generation of students.

Zipeng Wang, graduate student in aerospace, said he has dedicated more than 20,000 hours in the past three-and-a-half years to the satellite projects.

Students often teach themselves how to design and build satellites from Google and NASA’s website, Wang said.

“We built these things ourselves from the ground up, we didn’t buy it. Most other CubeSail programs out there, when they get their $100,000, they just spend all to buy someone else’s thing. But we built it ourselves,” DeJournett said.

by Mengjia Xu The Daily Illini