Israeli nonprofit SpaceIL and Israel Aerospace Industries (IAI) will be previewing Israel's inaugural voyage to the moon in Orlando, Florida, next week during a press conference.

This is the world’s first privately funded lunar mission — Israel’s lunar journey will begin this month when the lunar lander “Beresheet” (“In the Beginning”) blasts off aboard a SpaceX Falcon 9 from Launch Complex 40 at Cape Canaveral Air Force Station.

Upon completing this lunar mission, Israel will be joining superpowers the United States, China and Russia in landing a spacecraft on the moon. 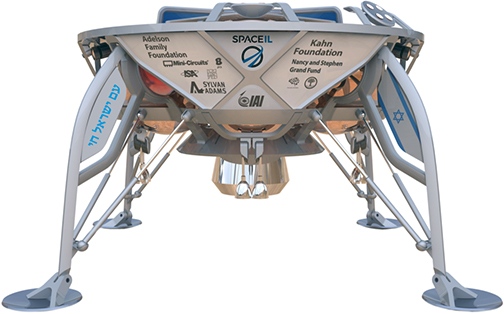 The first Israeli spacecraft, Beresheet.
Image is courtesy of SpaceIL and IAI.

Since the establishment of SpaceIL, the task of landing an Israeli spacecraft on the moon has become a national project with educational impact, funded mainly by Morris Kahn, a philanthropist and businessman who took the lead in completing the mission, serving as SpaceIL’s President and financing $40 million. Additional donors include Dr. Miriam and Sheldon Adelson — whose $24 million contribution enabled the project to continue — Lynn Schusterman, Steven and Nancy Grand, Sylvan Adams, Sami Sagol and others.

Morris Kahn, SpaceIL’s president, said that this upcoming launch in Cape Canaveral, and the lunar landing about two months later, will be the culmination of eight years of hard work and dedication. This mission is a source of inspiration for people around the world and SpaceIL is looking forward to making history and watching as the Israeli flag joins superpowers Russia, China and the United States on moon.

The Adelsons added that it is high time that the Jewish people and the State of Israel achieved this immortal milestone. In religion and ethics, science and scholarship, the nation has long reached for the stars; now Israel is rightfully reaching the moon. The lunar lander will be emblazoned with the Israeli flag and the Hebrew inscription: 'Am Yisrael Chai'. May its proud message — 'The Jewish Nation Lives' — shine upon the world, everywhere and eternally. Godspeed, SpaceIL!

Sylvan Adams, a Canadian-born businessman and philanthropist, said he is extremely proud, as an Israeli, to be part of SpaceIL and this journey, which will highlight Israeli technological prowess and the company's innovative approach to this venture, which is being accomplished at a small fraction of the price of the previous, government-funded landings. Israel punches far above its weight in every domain and the Beresheet spacecraft sets a new standard for space travel.