[SatNews]... the demand for UHF satellite capacity still exceeds supply by over 200 percent, according to recent Government reports. Here to assist is... 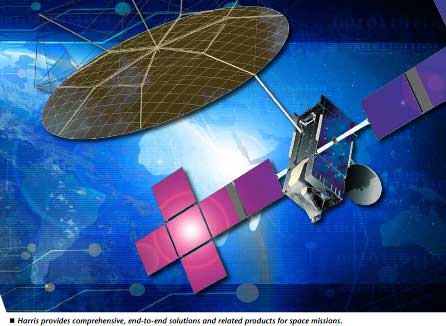 UHF is the ultra-critical communications link designed for users at the tactical edge, and for command and control reach-back. As the most robust beyond-line-of-sight communications available, access to scarce UHF satellite capacity is becoming increasingly important.

In February, the U.S. Government launched the first of five next generation UHF satellites known as the Mobile User Objective System (MUOS). Despite the substantial increase in capacity and capability offered by MUOS, the demand for UHF satellite capacity still exceeds supply by over 200 percent, according to recent Government reports.

The joint Harris CapRock and Astrium Services end-to-end commercial UHF service offers domestic and international users access to an unprecedented level of control over UHF capacity compared to today. The service will include dedicated 25 kHz and 5 kHz satellite channels for use with any UHF Tactical Satellite (TACSAT) capable radios, including several prevalent Harris models such as its Falcon II® and Falcon III® product lines. Using a new Harris TACSAT waveform, offered as part of the end-to-end service, users will be able to actively manage their channels by splitting the capacity into multiple networks for simultaneous users—a significant improvement over current levels of capability. The UHF service also will support legacy UHF waveforms such as DAMA and IW when using government infrastructure.

“UHF is essential when assured tactical communications are a must,” said Tom Eaton, president, Harris CapRock. “Because we are part of Harris Corporation, we are able to combine industry-leading radios and waveforms with Harris CapRock’s satellite and terrestrial infrastructure to offer end-to-end UHF solutions to customers operating in extreme environments. We also are enabling something our customers have never had before – full control over their UHF missions.”

“Astrium Services pioneered the concept of commercially supplied military-hardened SATCOM capacity, and this represents another step forward in delivering real capability directly to the end users,” said Simon Kershaw, executive director Telecom Governmental, Astrium Services. “Combining our military-hardened Skynet space segment with Harris’ market-leading radios and end-to-end solutions gives users a greater choice, straight capacity or managed UHF services, without worrying about integration, licensing or support. This combination and the launch of a fourth Skynet-5 satellite toward the end of this year means we can reach out to even more customers with this very capable, world-class system.”