Telenor Satellite Broadcasting's THOR 7 is Topped Off By Arianespace

[SatNews] Activities for Arianespace's Ariane 5 launch next month have moved into a new phase as the first of this heavy-lift mission's two payloads is fueled in French Guiana.

The THOR 7 satellite was topped off in the Spaceport's S5 payload preparation facility, readying this multi-mission telecommunications platform for its subsequent integration as the flight's upper passenger. Built by SSL (Space Systems/Loral), THOR 7 will be operated by Telenor Satellite Broadcasting—a major European satellite provider of broadcast and data communication services for customers in the broadcast, maritime, and oil and gas markets. 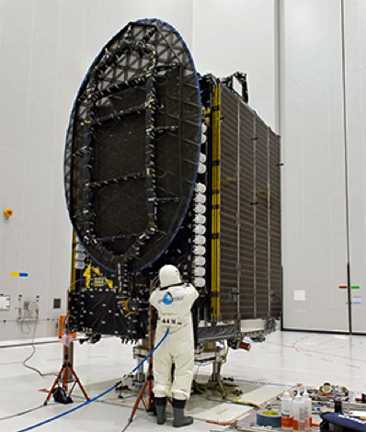 THOR 7 is prepared for fueling in the Spaceport’s S5 payload preparation facility.

THOR 7 is equipped with Telenor's first high-performance Ka-band payload, designed to serve the maritime sector, offering cost-effective solutions and high-powered coverage over the North Sea, the Norwegian Sea, the Red Sea, the Baltic Sea and the Mediterranean.  This relay platform also has a Ku-band payload for broadcast and television services in Central and Eastern Europe. Once positioned in the geostationary orbital slot at 1 degree West longitude after its deployment by Ariane 5, THOR 7 is to operate for 15 years or more.

Joining THOR 7 on Arianespace's Ariane 5 mission in April is the Sicral 2 military telecommunications satellite that will provide strategic and tactical links for French and Italian military forces, as well as reserve telecommunications capacity for other NATO nations. Sicral 2 arrived in French Guiana last week and is now undergoing its preparations at the Spaceport. It will ride in the lower passenger position of Ariane 5's dual payload arrangement.

The mission with THOR 7 and Sicral 2 is designated Flight VA222 in the numbering system for Arianespace's launcher family, which also includes the medium-lift Soyuz and lightweight Vega.