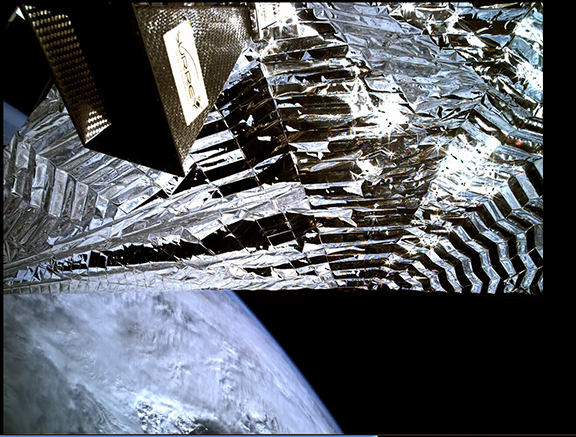 Image by the camera on TechDemoSat-1 of the Icarus-1 sail deployed with a view of Earth. Top left is the satellite’s Antenna Pointing Mechanism. Photo is courtesy of SSTL.

The deployment of the Icarus-1 drag sail, which was supplied by Cranfield University, marks the end of mission operations for SSTL’s TechDemoSat-1 small satellite which was launched into a 635 km. LEO in 2014. 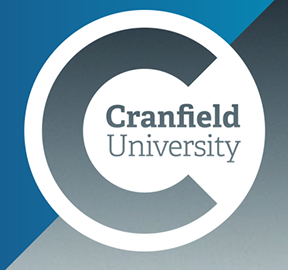 The Icarus-1 drag sail consists of a thin aluminium frame fitted around one of the external panels of the spacecraft in which four trapezoidal Kapton sails and booms are stowed and restrained by a cord.  Deployment is achieved by activating cord-cutter actuators, allowing the stored energy in the spring hinges to unfold the booms and the sail. 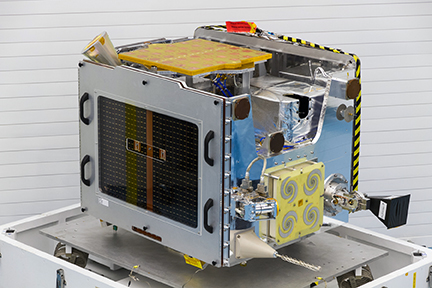 The TechDemoSat-1 satellite during assembly at SSTL in 2013. Photo is courtesy of the company.

The inspection camera on-board TechDemoSat-1 was manufactured by SSTL’s optics experts from COTS (Commercial-Off-The-Shelf) technologies and combines a color CMOS camera with a high performance machine vision lens delivering 1280 x 1024 resolution imagery and a field of view of 65 x 54 degrees. The camera previously captured footage moments after separation from the Fregat upper stage of the Soyuz-2 launcher, as the satellite began its first orbit in space.

SSTL is the satellite platform manufacturer and spacecraft operator for the RemoveDEBRIS mission, and the supplier of the Target satellite for ASTROSCALE’s ELSA-d end-of-life spacecraft retrieval and disposal technology demonstration mission.

TechDemoSat-1 was part-funded by Innovate UK and was jointly operated by SSTL in Guildford and by the Satellite Applications Catapult in Harwell. The spacecraft carried eight separate payloads from UK academia and industry, providing valuable in-orbit validation for new technologies:

Sarah Parker, Managing Director of SSTL, said it is fantastic to see an image of TechDemoSat’s deployed drag sail captured by the onboard inspection camera.  This on-orbit image of a deployed drag sail on one of the company's satellites is a first for SSTL and is a fitting culmination of mission operations for this highly innovative small satellite.

Stephen Hobbs, Head of Cranfield University’s Space Group, commented that Cranfield is delighted to see the Icarus de-orbit technology demonstrated successfully on-orbit once again.  With the Icarus sails now deployed on both TechDemoSat-1 and Carbonite-1, SSTL and Cranfield have demonstrated clear leadership in this technology.  All hope to see many more satellites following TechDemoSat-1’s example to keep space clear of debris. It’s been great to work with SSTL on this mission.