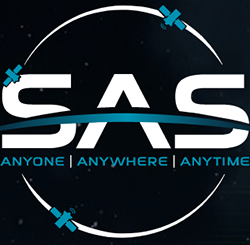 With this final testing phase complete, management is in advanced commercial discussions with Globalsat, with the objective to work on a commercial agreement for Globalsat to use the SAS Equatorial Constellation narrowband communication network. As announced on March 15, 2018, SAS entered into an Operational Evaluation Agreement with Globalsat to test the compatibility of SAS’ and Globalsat’s technology and business model to provide commercialized satellite communications services in Central and South America.

The operational evaluation was executed in two stages — lab testing and commercial field testing — with both stages now complete, validating the compatibility of SAS’ technology and the Company’s business model. The SAS team conducted the operational testing in South America together with the Globalsat Group team, to the full satisfaction of both parties. Discussions to agree to the commercial terms are now well advanced. The agreement will formalize the provision of SAS’ narrowband satellite communication services allowing Globalsat to provide its Central and South American customers with mobile connectivity and IoT services.

Today, approximately 10 percent of the Latin American population has no access to mobile connectivity. Poor mobile connectivity is experienced across large parts of the region due to lack of cellular coverage outside of main city centres, negatively impacting economic development, businesses, and people. An agreement between Globalsat and SAS will enable the provision of M2M and IoT connectivity services to the region, providing a much-needed service to this underserviced region.

Sky and Space Global’s CEO, Mr. Meir Moalem, said that the commercial testing with Globalsat was a great success both companies are actively progressing in the commercial discussions. This successful test was the world’s first operation using a smallsat for communication purposes in the American continent — many more will follow.”

Globalsat Group CEO, Mr. J. Alberto Palacios, added that the tests with the 3-Diamond smallsats were widely successful. When the Sky and Space 200 satellite constellation is complete and operational, it will be a game-changing technology that can transform narrowband satellite communications. Globalsat is ready to advance this relationship with SAS to agree on a commercial arrangement, which will see Globalsat deliver mobile connectivity and IoT services to Latin and Central America.