[SatNews] For more than a decade, scientists have used data from instruments on the Terra and Aqua satellites to...

...map the locations of wildfires burning around the globe. Now researchers have a new tool for observing fire. The Suomi National Polar-orbiting Partnership satellite (S-NPP) carries an instrument so sensitive to low light levels that it can detect wildfires in the middle of the night. On August 3, 2012, the Visible Infrared Imaging Radiometer Suite (VIIRS) on Suomi-NPP acquired the top image of wildfires blazing in eastern Siberia by using its “day-night band” to sense the fire in the visible portion of the spectrum. The brightest parts of the fire are white; smoke is light gray. 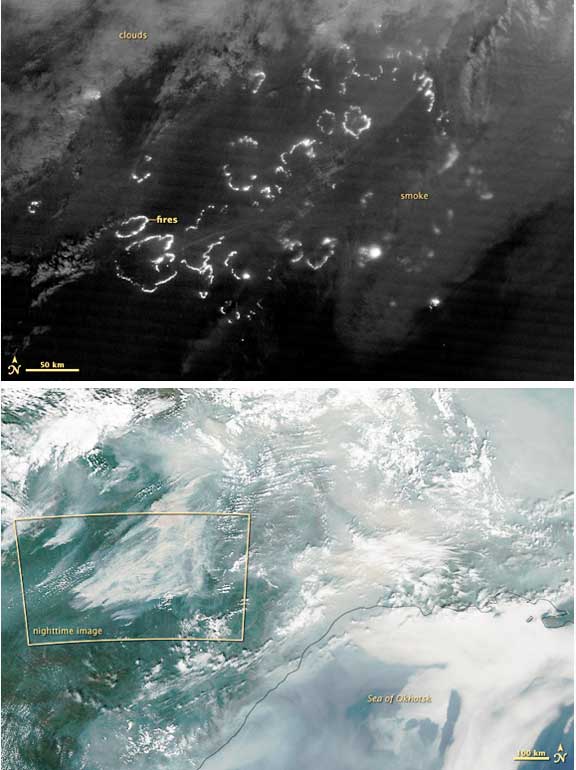 The Moderate Resolution Imaging Spectroradiometer (MODIS) instrument on NASA’s Aqua satellite, acquired a view of the same group of fires on the same day (lower image). The fires detailed in the yellow box were burning in the southeastern part of Yakutia near the city of Yakutsk, a port along the Lena River.

The vast majority of Russian wildfires occur in the eastern part of Russia in Siberia, generally along the country’s southern border. One exception was 2010, when extreme drought and high temperatures ignited a rash of fires west of the Ural Mountains near Moscow. This year’s blazes have followed the typical pattern and occurred primarily east of the Urals. Official estimates differ on the size of the area currently affected by burning, ranging from 18,000 to 23,000 hectares (70 to 90 square miles), according to news reports.