[SatNews] Indian space agency officials are gearing up to make the rocket that would carry seven satellites launch-ready for...

...February 25th., with a full system check, an official said. "After mating the satellites with the rocket—Polar Satellite Launch Vehicle—PSLV-C20- a full test of the rocket and the satellites was done. The rocket at this stage is considered as test condition," an official of Indian Space Research Organisation (ISRO) told DNAIndia. 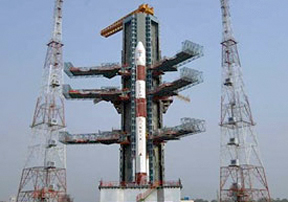 India's PSLV-C20 launch vehicle
According to officials, the rocket will progress from testable to launch condition in two days time after necessary connectors are plugged in. Officials said the full vehicle test revealed no deviations and everything is progressing normally for the Feb 25 evening flight. The launch window will be open February 22-25. During the 59-hour countdown, the systems will be checked and the rocket will be fuelled.

The Launch Authorisation Board (LAB) is expected to meet soon, two days before the scheduled launch date, to review the situation and give its final nod for the rocket's flight. The rocket will blast off from the Sriharikota rocket launch centre, around 80km from Chennai, India, carrying seven satellites including the Indo-French collaborative satellite SARAL. The total weight of all the seven satellites will be around 700kg.

The Indo-French initiative satellite SARAL (Satellite for ARGOS and ALTIKA) will study the sea surface heights and the data generated will be shared by both the countries. The other six satellites that PSLV-C20 would sling into orbit are two Canadian satellites NEOSSat (Near Earth Object Space Surveillance Satellite), the world's first space telescope designed by Canadian Space Agency (CSA) and Sapphire satellite built by MacDonald, Dettwiler and Associates (MDA), BRITE and UniBRITE (both Austrian), STRaND-1 (Britain) and AAUSAT (Denmark). The STRaND-1 (Surrey Training, Research, and Nanosatellite Demonstrator) is the world's first 'smart phone satellite' carrying a Google Nexus One phone running on the Android operating system. The 4kg satellite is a British mission, jointly developed by the University of Surrey's Surrey Space Centre (SSC) and Surrey Satellite Technology Limited (SSTL). The phone will run several applications including collection of data; take pictures of the earth with its camera. Once all the satellite's own operating systems have been checked out, key system functions will be transferred to the phone's components to take control and operate the satellite, said SSTL in its website.

According to the CSA, the satellite NEOSSat will detect and track asteroids and satellites circling the globe every 100 minutes and scanning space near the Sun to pin point otherwise almost invisible asteroids. The satellite will also be useful in tracking resident space objects including space debris.

Sapphire will look for resident space objects that include functioning satellites and space debris circling between 6,000 and 40,000km above the Earth.

The February 25th launch is the first of the 10 space missions that ISRO has planned for 2013. The government told the Parliament last year that ISRO is planning to accomplish 10 space missions in the next one year, with eight of them planned by September 2013 and the remaining two by the end of 2013.