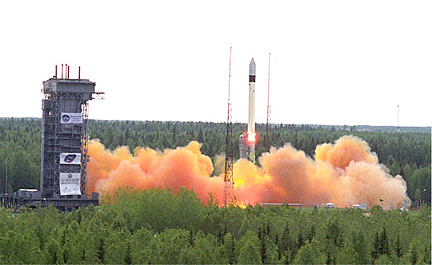 A Rokot launch.
[SatNews] A Rokot rocket carrying three military satellites blasted off from the...

The launch, initially scheduled for early December, was postponed due to malfunction in the Briz booster built by the Khrunichev State Research and Production Space Center, according to the official. It was the first launch of a space rocket by the Defense Troops from Plesetsk this year. Russia suspended the launch of Rokot carrier rockets after a failed launch in February 2011, when the rocket sent a Geo-IK-2 satellite into an incorrect orbit.

The 107 ton light Rokot launcher is a derivative of the Russian RS-18 (SS-19 Stiletto) intercontinental ballistic missile (ICBM). The carrier rocket contains two original lower stages of the ICBM and an upper stage for commercial payloads. It is designed to place satellites weighing less than two tons into low near-Earth orbits.