[SatNews] Domestically, the data from RCM is critical for disaster mitigation, warning, response and recovery.

Ushering in a new era, Minister Christian Paradis launched the next and final stage of Canada’s RADARSAT Constellation project on Wednesday. 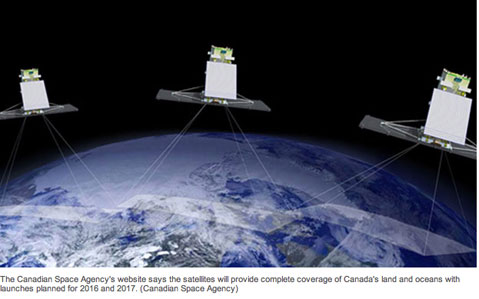 Christian Paradis is the Minister of Industry and Minister responsible for the Canadian Space Agency (CSA).

“Our Government is ensuring we have the tools to assert our sovereignty, monitor and manage our resources, and keep watch over our vast territory and coastal areas,” said Paradis. “The world-class RADARSAT Constellation Mission keeps Canada at the forefront of the design and operation of radar satellites.”

The RADARSAT Constellation Mission will provide complete coverage of Canada’s vast land mass, oceans and coastal approaches, at least once per day, and up to four times daily in the high Arctic.

Data produced by the Constellation will support key priorities of the Canadian Government related to: the Northern Strategy, especially in the Arctic; Defence; Safety, Sovereignty and Security; the Environment; Natural Resources; and Agriculture.

“Canada has a hard-won reputation for expertise in a highly competitive global environment. Through strategic investments in R&D and space, our Government is fostering industrial innovation, promoting commercialization, creating high-quality jobs, and positioning our industry for continued growth in the global economy,” the Minister added.

In the federal budget of 2010, the federal government allocated funds to complete the design and begin construction.

MacDonald, Dettwiler and Associates Ltd. (MDA), signed a $706-million deal with the Canadian Space Agency for the Radarsat Constellation Mission to build, launch and provide initial operations for what is planned to be a constellation of three satellites.

The new program will build on technology that MDA has developed through the Radarsat-1 and Radarsat-2 missions. The space agency's website says the satellites will provide complete coverage of Canada's land and oceans with launches planned for 2016 and 2017.

The satellites would be used for maritime surveillance, disaster management and monitoring of environmental change. MDA has developed space and satellite technology for many missions, including the Canadarm on the space stationThe contract with MacDonald Dettwiler and Associates, announced today, will lead to the completion of construction; the launch of the three satellites, planned for 2018; and the first year of operation of the mission.

The RADARSAT Constellation Mission project is led by the CSA and supported by its principal users: the Department of National Defence, Fisheries and Oceans Canada, Agriculture and Agri-Food Canada, Environment Canada, Natural Resources Canada and Public Safety Canada.

It will also help disaster management requirements, both in Canada and globally, and provide high resolution, all-weather imagery of most places in the world on a daily basis.

The Mission will also support the Government’s foreign policy objectives by contributing satellite images for international security and humanitarian missions.

Domestically, the data from RCM is critical for disaster mitigation, warning, response and recovery. Disaster types supported include flood monitoring and relief, oil spills, changes in the permafrost in northern Canada, volcano and earthquake warning and hurricane monitoring.

RCM data will also be marketed to commercial users and value-added service providers who make use of earth observation data to provide an array of information solutions such as environmental consulting, geomatics, resource management, with applications in various industrial sectors.