Satellite for the Russian Ministry of Defense Successfully Launched 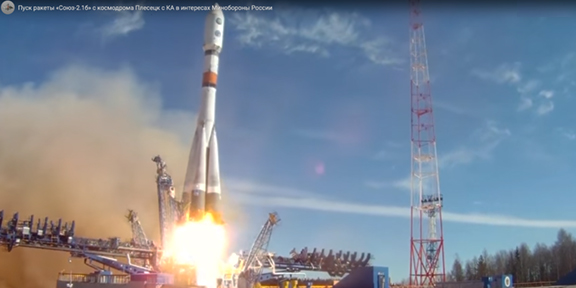 The Russian Air and Space Forces successfully launched a Soyuz-2.1b launcher from launch pad No. 4 of the launch complex No. 43 at the Plesetsk site. Official statements indicate the launcher carried "a new-generation satellite for the ministry of defense." The satellite is being delivered to the orbit by a Fregat-M booster.

The satellite is the second "Tundra" spacecraft of the new early-warning system, known as EKS. The system is expected to include satellites in Molniya-type, highly-elliptical orbit ,as well as geostationary satellites. It was designated Cosmos-2518.

The first satellite of the system, Cosmos-2510, was launched into an HEO orbit in November of 2015. Cosmos-2518 appears to be an HEO satellite as well — it was reported that the industry delivered the first two HEO satellites in October of 2015 and that there was a delay with the first GEO spacecraft.

Satellites of the EKS system are the only early-warning satellites that are currently in service. The old US-KS/US-KMO system ended operations in 2014. A working early-warning constellation would probably include about ten satellites on HEO as well as several GEO satellites.

The new Russian armament program appears to call for ten new satellite to be launched by 2020. However, it should be noted that Russia does not depend on the space tier of its early-warning system to the extent the United States does, so the lack of coverage by satellite does not necessarily increase the risk of miscalculation.