The French-Chinese CFOSat satellite will be launched on Monday, October 29, atop a Chinese Long March 2C vehicle from the Jiuquan launch base located in Inner Mongolia.

This science mission to study ocean surface winds and waves is the first joint project pursued under French-Chinese space cooperation. Developed by CNES and the China National Space Administration (CNSA), the satellite will carry two radar instruments: SWIM (Surface Waves Investigation and Monitoring), developed by France, which will survey the length, height and direction of waves; and SCAT (wind SCATterometer), developed by China, which will measure the strength and direction of winds. The two instruments will enable measurements of winds and waves to be acquired simultaneously for the first time. CFOSat will thus characterize the dynamics of waves and how they interact with surface winds more comprehensively than ever before. 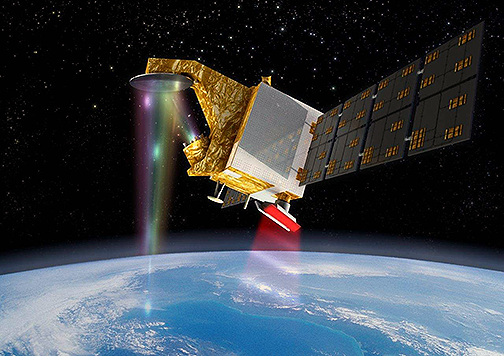 Artistic rendition of the CFOSat. Image is courtesy of CNES.

The CFOSat mission has been designed to gain new insights into ocean surface characteristics (winds and waves) and their impacts on the atmosphere-ocean exchanges that play a key role in the climate system. It will shed new light on the hitherto poorly understood role of waves in the lower layers of the atmosphere, the ocean surface and polar sea ice. Complementing other current Earth remote-sensing satellites, CFOSat will deliver crucial observations for atmospheric and sea-state forecasting and digital modelling of the coupled ocean-atmosphere system. The satellite will also provide precise data on deep-sea wave conditions, which have a bearing on the impact of waves on coastal areas.

The French scientific community is closely involved in the CFOSat mission through two research laboratories attached to the national scientific research center CNRS: the LATMOS atmospheres, environments and space observations laboratory (CNRS/UVSQ/SU) and the LOPS physical and space oceanography laboratory (CNRS/IRD/Ifremer/UBO), which came up with the concept for the SWIM instrument, the first rotating-beam scatterometer of its kind. The instrument was developed by Thales Alenia Space with CNES oversight. French teams will task and monitor the SWIM instrument from the mission center at the Toulouse Space Centre.

In recent years, LATMOS, LOPS and teams at the national weather service Meteo-France have been conducting research in readiness to use data collected by SWIM and SCAT — on the ocean surface, ocean/atmosphere interactions and severe weather events — and multiplying their efforts to prepare to validate these data for research and applications purposes. The teams have worked closely with industry partners specializing in satellite data processing and validation such as ACRI-ST, CLS and et Ocean Data Lab.

After a month or so checking out the instruments, the mission will be ready to deliver data to science teams at LATMOS, LOPS and the marine forecasting department of Meteo-France, who will then analyze and validate them. Data will be made available to the scientific community after six to seven months.

Looking forward to the launch, CNES President Jean-Yves Le Gall said that CFOSat materializes France and China’s commitment to tackling climate change and is the result of a unique partnership in this domain. CNES and CNRS, through their research laboratories and partners, are the standard-bearers of France’s excellence in innovative space technologies which, combined with China’s technological expertise, makes CFOSat such a unique satellite that is set to improve our knowledge and our ability to forecast climate phenomena between the ocean and atmosphere more accurately.

Antoine Petit, Chairman and CEO of CNRS, the French national scientific research centre, added that with the CFOSat satellite, scientists can look forward to new and original insights into ocean surface winds and waves that will inform their research into ocean and atmosphere processes. Teams at CNRS and CNES have been working to prepare this space mission for more than 10 years. They are now readying to validate and then use its data in a spirit of international cooperation.