The current generation of satellite launch vehicles, however, is expensive to operate, often costing hundreds of millions of dollars per flight. Moreover, U.S. launch vehicles fly only a few times each year and normally require scheduling years in advance, making it extremely difficult to deploy satellites without lengthy pre-planning. Quick, affordable and routine access to space is increasingly critical for U.S. Defense Department operations. 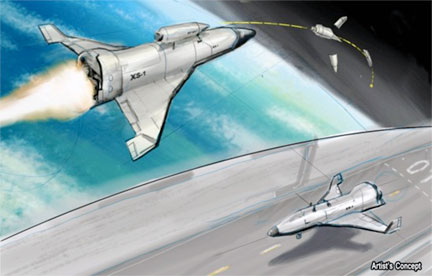 To help address these challenges, DARPA has established the Experimental Spaceplane (XS-1) program. The program aims to develop a fully reusable unmanned vehicle that would provide aircraft-like access to space. The vehicle is envisioned to operate from a “clean pad” with a small ground crew and no need for expensive specialized infrastructure. This setup would enable routine daily operations and flights from a wide range of locations. XS-1 seeks to deploy small satellites faster and more affordably, while demonstrating technology for next-generation space and hypersonic flight for both government and commercial users.

“We want to build off of proven technologies to create a reliable, cost-effective space delivery system with one-day turnaround,” said Jess Sponable, DARPA program manager heading XS-1. “How it’s configured, how it gets up and how it gets back are pretty much all on the table—we’re looking for the most creative yet practical solutions possible.”

XS-1 envisions that a reusable first stage would fly to hypersonic speeds at a suborbital altitude.  At that point, one or more expendable upper stages would separate and deploy a satellite into Low Earth Orbit. The reusable hypersonic aircraft would then return to earth, land and be prepared for the next flight. Modular components, durable thermal protection systems and automatic launch, flight, and recovery systems should significantly reduce logistical needs, enabling rapid turnaround between flights.

Key XS-1 technical goals include flying 10 times in 10 days, achieving speeds of Mach 10+ at least once and launching a representative payload to orbit. The program also seeks to reduce the cost of access to space for small (3,000- to 5,000-pound) payloads by at least a factor of 10, to less than $5 million per flight. XS-1 would complement a current DARPA program already researching satellite launch systems that aim to be faster, more convenient and more affordable: Airborne Launch Assist Space Access (ALASA). ALASA seeks to propel 100-pound satellites into orbit for less than $1 million per launch using low-cost, expendable upper stages launched from conventional aircraft.