Signed and Sealed in Africa for $14 Million ... Chronosat GmbH Will Increase Use of RSCC's Express-AM7 Satellite 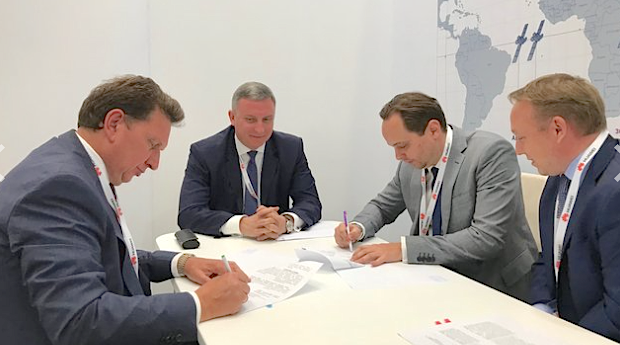 The two companies, RSCC a Russian and Chronosat GmbH a European company, signed an agreement while attending AfricaCom 2017 stipulating an increased use of RSCC’s Express-AM7 satellite capacity by the European company. The agreement is worth $14 million over five years.

Cooperation between the RSCC and Chronosat GmbH (Germany) began in 2017, when the European company began using the capacity of the heavy-lift Express-AM7 satellite to provide services in the countries of the Middle East. The successful experience of working with RSCC and competitive advantages of the new Russian AM7 satellite, which was orbited in 2015, have allowed to significantly expand the capacity leased by Chronosat GmbH. A strategic agreement worth more than $14 million over the next five years has been reached on the use of the RSCC spacecraft capacity.

The contract was signed at AfricaCom 2017 (Cape Town, South Africa) as part of the business program. Attending the signing ceremony was Oleg Dukhovnitsky, Head of the Federal Communications Agency.

Yuri Prokhorov, the RSCC General Director, noted that RSCC has a long record of successful operations in the Middle East and Europe, where RSCC has built long-term relations with large consumers of satellite communications services. He continued that they hope that their cooperation with Chronosat and the agreements reached today will strengthen the positions of the RSCC, including on the African continent.

Konstantin Ryabtsev, the Chronosat GmbH General Director, said that they appreciate the RSCC’s high level of customer service and quality characteristics of the new generation Express-AM7 satellite capacity. HE added that their immediate-term plans envisage the use of the RSCC satellite fleet for boosting their business in the Middle East, Africa and other regions of the world. They very much hope that their partner’s professional approach, an exceptional focus on the customer, and competent technical support of the business will enable them to implement many joint projects in the future.