The contracts result from iForte’s recent selection by Indonesia’s Ministry of Communication and Information Technology to support the Ministry’s program of providing “Internet Fixed Broadband and Mobile Cellular Backhaul over Indonesia via a GEO Fixed Satellite Services (FSS) system.”

Indonesia, the world’s fourth most populous country, is comprised of more than 17,000 islands, of which roughly 6,000 are inhabited. Providing broadband communications to such a highly dispersed population has long been a goal of the Indonesian government. To achieve this, Indonesia’s Ministry of Communication and Information Technology initiated a competitive procurement early in 2018 for a geostationary FSS solution using HTS technology. iForte’s proposal relied on Telstar 18 VANTAGE, a new Telesat satellite that recently entered commercial service. 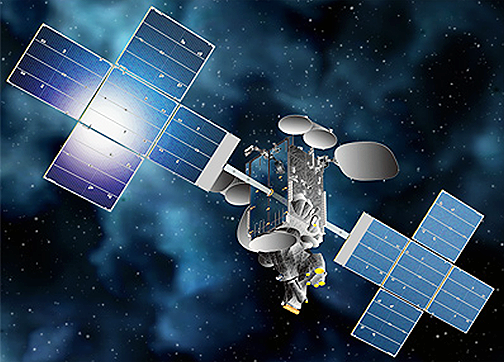 Artistic rendition of the Telstar-18 satellite.

Image is courtesy of Telesat.

iForte, a longstanding Telesat customer, has been using C-band capacity on Telesat’s Telstar 18 to provide USO VSAT services in Indonesia for over 10 years. Once the Ministry began its procurement process, iForte worked with Telesat to make Telstar 18 VANTAGE a core component of its proposed solution for serving Indonesia’s broadband requirements. After iForte received notice of its selection under the Ministry’s procurement process, it contracted with Telesat for multiple C-band transponders on Telstar 18 VANTAGE for the life of the satellite and entered into a separate multi-year contract for all of Telesat’s HTS spot beams on the same satellite.

Peter Djatmiko, iForte’s President Director and CEO, reported that iForte is honored to have been selected by Indonesia’s Ministry of Communication and Information Technology to implement a high performing, cost effective broadband satellite solution across our country. This award would not have been possible without the close working relationship between iForte and Telesat. By relying on the advanced capabilities of Telstar 18 VANTAGE, iForte was able to propose to the Ministry a highly innovative GEO satellite solution that offers both cost effectiveness and superior broadband performance.

Dan Goldberg, Telesat’s President and CEO, congratulated iForte on winning this competitive procurement and thanked them for making Telstar 18 VANTAGE a central component of its proposed solution to the Government of Indonesia to expand and improve broadband connectivity for all Indonesians. This is an important success for both companies and another example of how Telesat’s collaborative approach with customers results in highly innovative solutions that benefit consumers and enterprises throughout the world.