Streambox's VISION Transmits Down Under Water As Volcano Blow Its Top 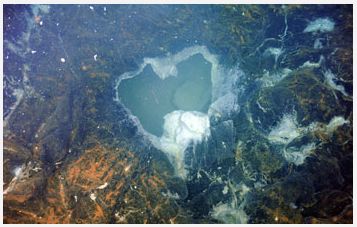 NSF Ocean Observatories Initiative Streams Live This image looks into the subsurface at Axial Seamount and shows a "snowblower" vent, a collapsed lobate lava flow about 1 meter (3 feet) across with white materials (bacterial mats and biofilm materials that coat the surfaces) thriving in nutrient-rich waters that are slightly above ambient (2 degrees C) temperature. White, dense accumulations of filamentous bacteria surround the snowblower. Credit: Canadian Scientific Submersible Facility and the University of Washington
[SatNews] Some people work at a desk, some on oil derecks, ships at sea, space ships, and then some go down...5,000 feet down.

5,000 ft. underwater in Seattle, Streambox, Inc. today announced that the University of Washington-led VISIONS’11 expedition selected Streambox 9300 Encoders, Decoders, and full platform of video transport solutions as research tools to transmit live observations of changes in the seafloor environment following the April 2011 eruption of Axial Seamount, an underwater volcano off the coast of Oregon.

The August 11th through September 1st, 2011 expedition was in support of installing the regional cabled network component of the National Science Foundation's (NSF) Ocean Observatories Initiative (OOI). This cabled component of the OOI, which is now under construction, is a 25-year-long project for exploration and scientific discovery in the Northeast Pacific Ocean and is led by the University of Washington. The networked system of ocean observing sensors will be interconnected by 900 km (540 miles) of electro-optical cable. The live video transmission during VISIONS '11 was an early example of the real-time 24/7 capabilities that will be possible when the OOI cabled system begins operations in 2014. Axial Seamount is one of several OOI study sites in the Western Hemisphere.

The University of Washington's 274’ Thomas G. Thompson research vessel spent several days working 265 miles off the coast of northern Oregon to examine Axial. This underwater volcano is located where the Juan de Fuca tectonic plate is diverging from the Pacific plate. The VISIONS '11 team deployed the Canadian Scientific Submersible Facility’s (CSSF) underwater robotic vehicle ROPOS (Remotely Operated Platform for Ocean Science) connected via fiber optic cable to an HD video switcher that fed into a Streambox 9300 Encoder on the ship. The Encoder utilized a satellite connection to stream a 24/7 live video feed for majority of the three-week expedition back to the University of Washington campus in Seattle, as well as to the Internet for the public to view worldwide.

According to Ed McNichol, VISIONS '11 Video Project Manager and a contractor with the University of Washington, "We measured the performance of multiple technologies and ultimately selected Streambox to bring onboard this year, which transformed the scope of our capabilities. With Streambox technology we can lay the foundation for the infrastructure of future expeditions, and eventually evolve to year-round, around-the-clock video and other data collection and transmission.”

The Thompson was outfitted with a Streambox 9300 Encoder and 2.5-meter satellite dish to send the video from ROPOS to the Streambox Broadcast server located at the University of Washington campus in Seattle, traveling a total distance of 45,000 miles. The Streambox solution offers Forward Error Correction (FEC), which was a critical feature for this application to maintain the quality of the video content from a challenging low-bandwidth environment. The video was transported to the University where two Streambox 9300 Decoders were used for HD playout and SD web playout. 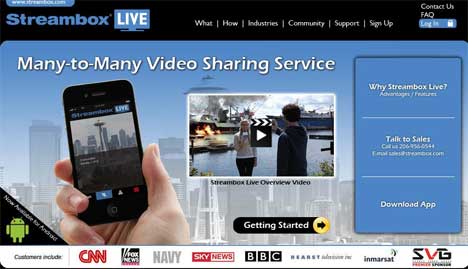 Other institutions also leveraged the high-quality subsea footage streamed using Streambox technology. Dr. Leslie Sautter of College of Charleston in South Carolina was able to implement a distance learning solution by teaching a Marine Geology course from the vessel, powered by Streambox. The students enrolled in the course viewed video of Dr. Sautter on a large display in a classroom on campus in South Carolina using Streambox Media Player. Professors and scientists at Rutgers University in New Jersey also observed the live HD video feed from the expedition on a large display in Rutgers’ Coastal Ocean Observation Lab or “COOL Room” using Streambox Media Player. This allowed the Rutgers oceanography students and professors to contribute valuable input remotely without being on the research vessel. In addition to involving universities, the Seattle Pacific Science Center engaged the public by featuring the live HD feed for exhibit-goers to witness the exploration as well as interact with researchers on the vessel by submitting questions while watching the video feed.

“Because of Streambox, there were hundreds of people riding along with us while we conducted this research on our journey of exploration,” said McNichol. OOI plans call for ENDS annual expeditions on the Thompson. The success of the Streambox technology in 2011 bodes well for its continued use in the project.

More information about Streambox is available at.