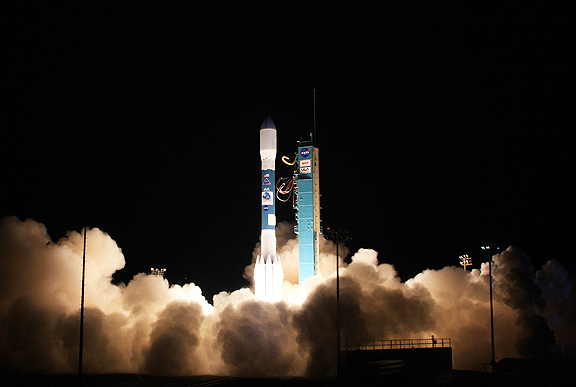 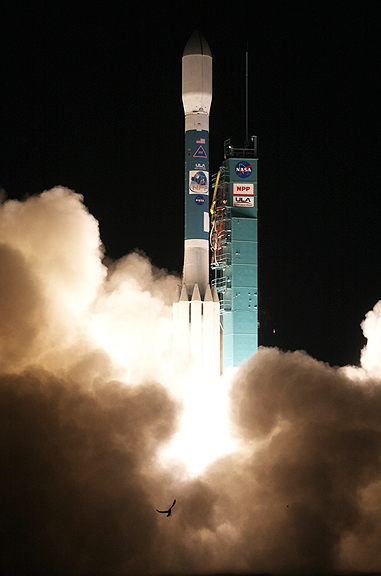 “In addition to the NPP spacecraft, the Delta II also carried three Poly Picosatellite Orbital Deployers (P-POD) dispensers on the upper stage that deployed six cubesats following completion of the primary NPP mission,” said Sponnick. “We are pleased that ULA can provide access to space for these university research satellites and expand the reach of the science community.”

NPP will extend and improve upon the Earth climate data records established by NASA's Earth Observing System (EOS) fleet of satellites that have provided critical insights into the dynamics of the entire Earth system: clouds, oceans, vegetation, ice, solid Earth and atmosphere. “The Delta II vehicle continues to offer excellent reliability and best value to our customers,” said Sponnick. “We look forward to working with our customers to provide future Delta II launches here at Vandenberg.”

Previously reported regarding this important launch and satellite...

Jim Sponnick VP of Mission Operations at ULA writes...
United Launch Alliance (ULA) is proud to launch the NPOESS Preparatory Project (NPP) mission. The Delta II will deliver the NPP spacecraft into a polar earth orbit, where it will begin its mission to create a next-generation U.S. climate and weather monitoring system. NPP is the fourth of five critical missions ULA is scheduled to launch for NASA in 2011. These missions will address important questions of science — ranging from climate and weather on planet earth to life on other planets and the origins of the solar system. We are delighted that NASA has chosen the Delta II for this mission developed by the Goddard Space Flight Center (GSFC) and manufactured by the Ball Aerospace and Technology Corporation.

ULA is focused on attaining Perfect Product Delivery for the NPP mission, which includes a relentless focus on mission success (the perfect product) one launch at a time, and also excellence and continuous improvement in meeting all of the needs of our customers (the perfect delivery).

I congratulate the entire ULA team and our mission partners for their significant efforts in bringing NPP to launch. Go Delta, Go NPP!

Delta ii 7920-10C launch vehicle — Overview Delta II 7920-10C launch vehicle
NPP will carry a diverse payload of scientific instruments to perform atmospheric temperature and moisture sounding, cloud imaging, sea surface temperature measurements, as well as measurements of ozone, land and ocean biological productivity, aerosol concentrations, and climate system radiation balance. Data from NPP will be distributed to meteorologists at the National Oceanic and Atmospheric Administration (NOAA) and the U.S. Department of Defense (DOD), as well as to climate researchers around the globe. 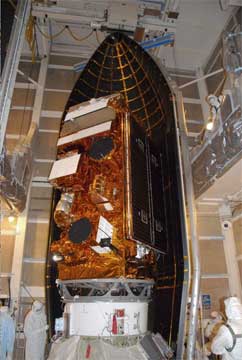 The NPP spacecraft stands atop the Delta II rocket that will lift it into Earth orbit. Photo credit: NASA/Don Kososka, VAFB
Many of NPP’s measurements continue long-term climate data records from existing Earth-observing missions such as Terra, Aqua and Aura. By flying a suite of new, advanced-technology remote sensing instruments, the NPP mission will continue critical weather and climate measurements and reduce risk for the next-generation meteorological satellite system. The measurements taken by NPP will provide critical data to support operational weather forecasting, as well as long-term climate research. 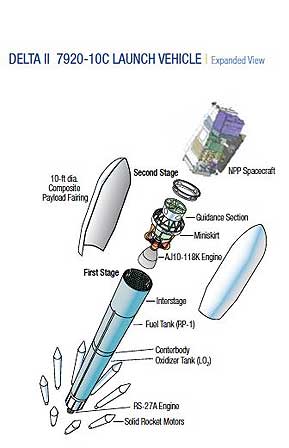 The Delta II vehicle will launch the NPP spacecraft from Space Launch Complex 2 West (SLC- 2W) at Vandenberg Air Force Base down an initial flight azimuth of 196° from true north. Six solid rocket motors (SRM) are lit on the ground and burn for approximately 64.0 seconds. Jettison occurs at 86.0 seconds after launch in order to satisfy range safety trajectory shaping constraints.

Payload fairing jettison occurs at 280 seconds when the free molecular heating rate has dropped below 0.1 BTU/ft2-sec (1135 W/m2). Following the first cut-off of the second-stage engine (SECO-1) at 623.7 seconds, the second stage performs an attitude reorientation maneuver and begins a thermal conditioning roll.

Upon completion of the thermal conditioning roll a maneuver is performed to orientate the second stage to the correct attitude for the first restart. Following the first restart, the second stage is re-oriented to the desired attitude for spacecraft separation, which occurs at 3,525 seconds in view of the TDRS satellites for telemetry coverage. Spacecraft separation ends the primary portion of this Delta II mission at just short of 59 minutes after liftoff.