In early September of 2019, an automated timer unit on the Prox-1 satellite, launched in late June 2019 by the U.S. Air Force Research Laboratory’s University Nanosatellite Program, activated deployment of TUI’s Terminator Tape module. The Terminator Tape is a small module, weighing less than two pounds and about the size of a notebook, designed to attach to the exterior of a satellite. 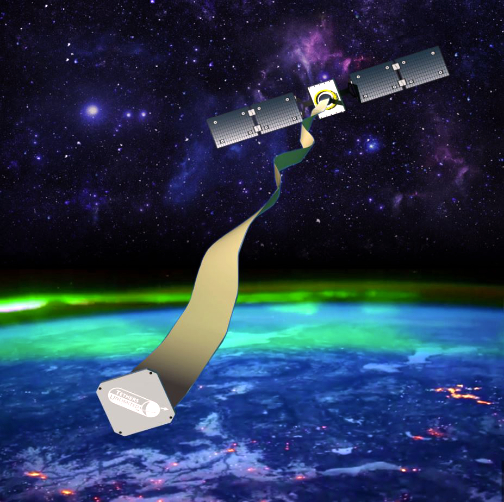 The Terminator Tape Deorbit Module interacts with the space environment to rapidly drag a satellite out of orbit. Image is courtesy of Tethers Unlimited.

When the satellite has completed its mission and is ready to be disposed of, an electrical signal from either the satellite or an independent timer unit will activate the Terminator Tape, causing it to deploy a 230-foot long conductive tape from the satellite. This tape interacts with the space environment to create a drag force on the satellite that lowers its orbit far more rapidly than it would if it were simply abandoned in orbit.

TUI is currently collaborating  with Millennium Space Systems, TriSept, and RocketLab to prepare a scientific method-based LEO flight experiment called “DRAGRACER” which will compare the de-orbit of two identical satellites, one with and one without a Terminator Tape, in order to enable robust characterization of the tape’s performance.

Dr. Rob Hoyt, TUI’s CEO, said that three months after launch, as planned, the company's timer unit commanded the Terminator Tape to deploy and from observations by the U.S. Space Surveillance Network that the satellite immediately began de-orbiting over 24x faster, instead of remaining on-orbit for hundreds of years. Rapidly removing dead satellites in this manner will help to combat the growing space debris problem. This successful test proves that this lightweight and low-cost technology is an effective means for satellite programs to meet orbital debris mitigation requirements.