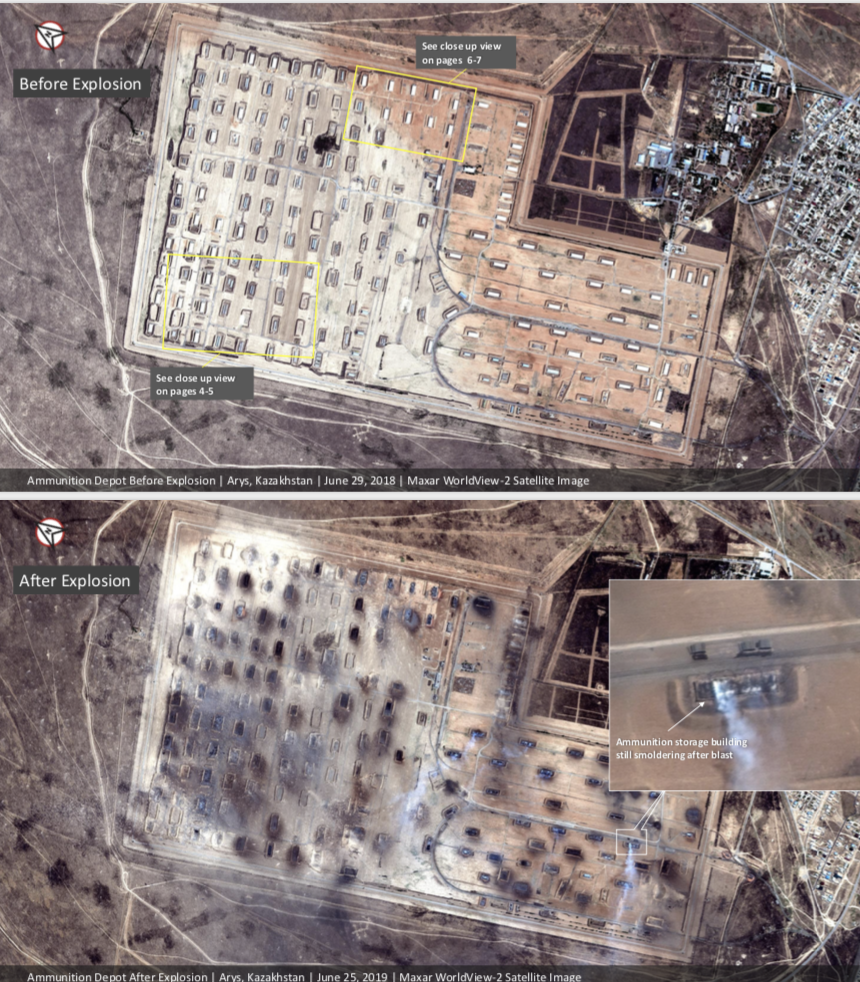 Before and after of the ammunition depot, all photos are satellite images ©2019 Maxar Technologies

Satellite photos supplied by Maxar of before and after reveal a dramatic explosion, and subsequent fire, of an ammunition depot in Arys, Kazakhstan that killed two, injured at least 46 and required the forced evacuation of tens of thousands.

Maxar collected new satellite imagery yesterday (June 25th) of the aftermath of a large ammunition depot explosion that occurred on June 24 near the Kazakhstan city of Arys. Maxar’s satellite imagery reveals extensive damage to the facility as well as evidence that the blast widely scattered burning debris across fields and the nearby city.

The cause of the fire has not yet been determined. Authorities say a criminal probe has been launched, with President Kassym-Jormart Tokayev pledging that those responsible would be “prosecuted under the law.” Tokayev visited the region late on Monday, meeting with some injured residents.

Small fires are still burning within the destroyed depot. According to press reports, Kazakhstan’s Emergency Situations Committee said the blast occurred at around 9:20 a.m. following the outbreak of a fire at the military base. The explosion at the depot near the town of Arys in southern Kazakhstan’s Turkestan region was the fourth such incident in the last decade.

The governor of Turkestan, Umirzak Shukeyev, announced a state of emergency on Monday and the state ordered the evacuation of Arys’ population of 45,000. At this time there is no information regarding whether the residents will be allowed to return to their homes as the danger of unexploded ammunition that could have been thrown from the explosion could turn a community into a minefield. 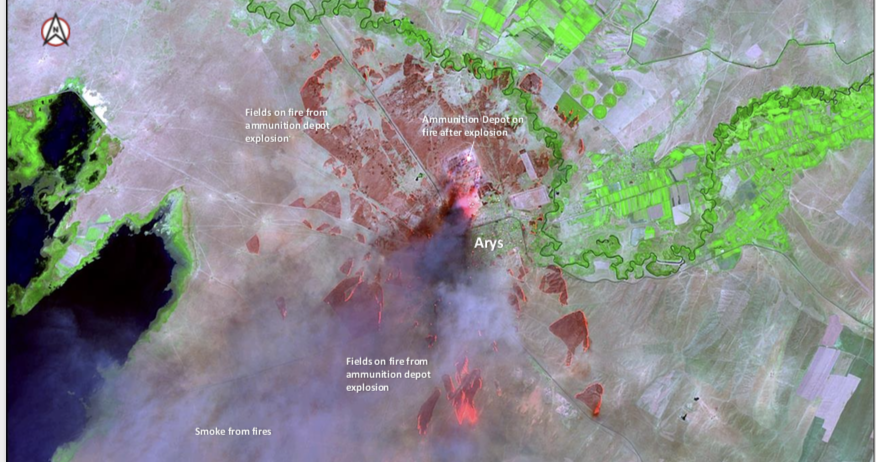 Footage uploaded to youtube on the internet showed panic in the town as residents fled in desperation using all types of transportation. Some drove, while others left on foot or by bicycle from a town thick with grey smoke. Military personnel stopped drivers and forced them to make room in their vehicles for pedestrians, especially women and children. As people departed, the sound of explosions and shells whistling through the air could distinctly be heard.

It’s unclear when the people of Arys will be able to return to their homes. Unexploded ammunition, potentially thrown from the depot in the blasts, makes the town into a veritable minefield. Railroad traffic had been curtailed, and the explosion was forceful enough to be reported by the seismic service.

The history of past incidents include three, in 2009, 2014 and 2015, that were blamed on negligence and a failure to observe safety regulations.  After the 2009 explosion of a KazArsenal warehouse that involved the death of two, the company's management were punished.