NOAA's next weather satellite in the Geostationary Operational Environmental Satellite – R Series, GOES-S, left its Colorado home where it was built and is now in Florida where it will undergo preparations for launch from NASA's Kennedy Space Center. 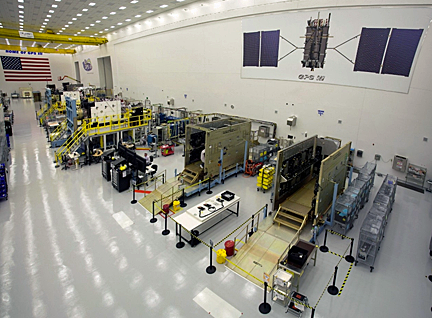 Lockheed Martin is contracted for, and is assembling, 10 GPS III satellites at the company’s nearly 40,000 sq. ft. GPS III Processing Facility near Denver, Colorado. The $128 million, state-of-the-art, manufacturing factory was designed in a virtual reality environment to maximize production effectiveness and efficiency. The GPF includes a specialized cleanroom and test chambers designed to streamline satellite production. Photo is courtesy of Lockheed Martin.

GOES-S is scheduled to launch on March 1, 2018, when it will join its sister satellite, GOES-16, in orbit. GOES-16 has already proved vital in forecasting and is a dramatic improvement of weather forecasting speed, accuracy and detail over the previous generation of satellites. 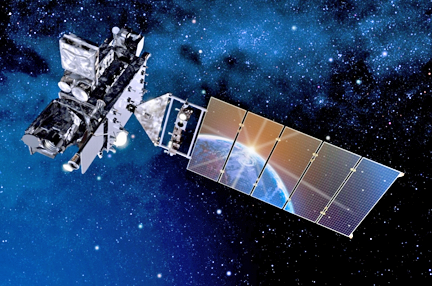 Artistic rendition of a GOES satellite.
Image is courtesy of Lockheed Martin.

Lockheed Martin designed, built and tested the satellite and is responsible for spacecraft launch processing. GOES-S will launch aboard a United Launch Alliance Atlas V 541 rocket from Cape Canaveral Air Force Station in Florida. In addition to all four GOES-R Series satellites (R, S, T and U), Lockheed Martin also designed and built the Solar Ultraviolet Imager (SUVI) and the Geostationary Lightning Mapper (GLM) instruments that will fly aboard each spacecraft.

NOAA funds, manages, and will operate the GOES-R Series satellites. NASA oversees the acquisition and development of the GOES-R Series spacecraft and instruments for NOAA. The program is co-located at NASA's Goddard Space Flight Center in Greenbelt, Maryland.

Tim Gasparrini, VP and GOES-R Series program manager at Lockheed Martin Space Systems, stated that the team understands the important mission of this national asset, especially after the year of severe weather that our country experienced. Progress continues with this second satellite in the series and the company is focused on performing the final tests and readying the satellite for a successful launch.