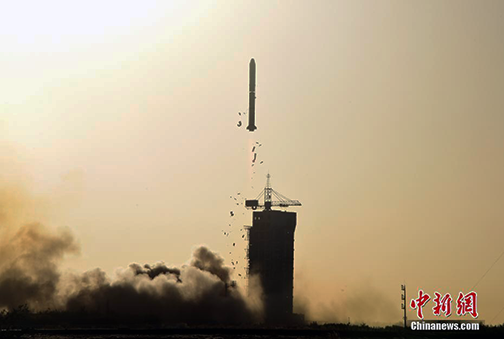 The Long March 2C carrying CFOSat and a host of CubeSats lifts off from Jiuquan Satellite Launch Center at 00:43 UTC on October 29, 2018. Photo is courtesy of CNS.

A Long March 2C rocket has successfully placed the China-France Oceanography Satellite (CFOSat) into orbit following the spacecraft's launch from Jiuquan in the Gobi Desert on Monday, according to a post by Andrew Jones at gbTimes.

Launch occurred at 08:43 local time (00:43 universal time) on October 29 at Jiuquan with the China Aerospace Science and Technology Group (CASC), the main contractor for the Chinese space program, declaring success of the launch within an hour after liftoff. Also aboard for the ride to a 520 km. SSO were a range of smallsats developed by private space companies and a Belarusian university.

The CFOSat mission has been designed to gain new insights into ocean surface characteristics (winds and waves) and their impacts on the atmosphere-ocean exchanges that play a key role in the climate system. The satellite will characterize the dynamics of waves and how they interact with surface winds more comprehensively than ever before, and provide crucial observations for forecasting and digital modelling of the coupled ocean-atmosphere system.

Upon success of the launch, CNES President Jean-Yves Le Gall commented from Jiuquan that the CFOSat mission was, "a major project confirming our nations’ commitment to tackling climate change and the culmination of a unique partnership in this domain."

Chinese President Xi Jinping and French counterpart Emmanuel Macron congratulated each other after the success.

This was the 31st Chinese orbital launch of 2018, following the failed attempt by Landspace on Saturday to become the first private Chinese launch company to reach orbit.

To read the entire, informative article, please access this direct link to the gbTimes infopage...