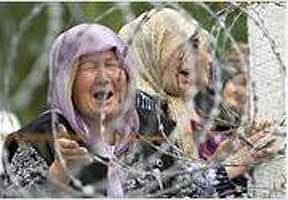 Ethnic Uzbek refugees, fled from clashes in the city, cry as they gather on the Kyrgyz-Uzbek border, while waiting for permission to escape to Uzbekistan, near Osh, southern Kyrgyzstan, June 15, 2010. The violence in Kyrgyzstan appears to have stopped spreading and may be diminishing, a senior U.S. official told Reuters on Tuesday, adding that there was still an urgent need to restore order and provide aid. REUTERS/Shamil Zhumatov
[SatNews] TSF deploys an emergency telecoms team to Kyrgyzstan to assist in the response. Within the framework of its partnership with the United Nations, the team is traveling today from TSF Headquarters to Bichkek, Kyrgyzstan, to provide emergency ICT services to the humanitarian community in support of the current humanitarian relief operations. The objective is also to provide calling services to the displaced populations who have fled the conflict.

The official death toll in southern Kyrgyzstan rose to 179, mainly in Osh and Jalal-Abad Provinces. There are over 1,870 people injured. It is unclear what has sparked the violence. The unrest that broke out in the city of Osh in the evening of June 10 between Kyrgyz and Uzbeks is the worst ethnic violence in Kyrgyzstan in 20 years. The south of Kyrgyzstan is home to an ethnic Uzbek minority of almost one million. 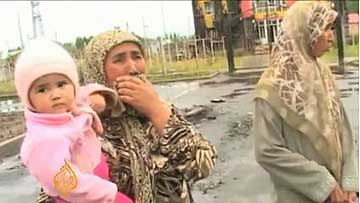 Women cry looking for their men and describing how their men have been kidnapped. Source: YouTube Al Jazeera TV
Sporadic violence continues in pockets in southern Kyrgyzstan. Escalating ethnic clashes have prompted tens of thousands of ethnic Uzbeks to flee the country. An estimated 100,000 refugees from southern Kyrgyzstan have been admitted into Uzbekistan. 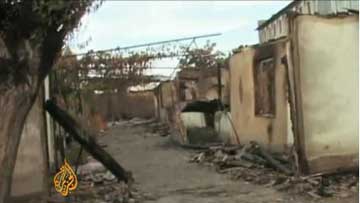 The Uzbekistan authorities closed the border in the evening of 14 June but reopened it on June 15 to allow passage. Some 9,000 refugees arrived from Kyrgyzstan on the 16 June. The refugee influx has been mainly to the Uzbek provinces of Andijan, Fergana and Namangan. The highest numbers of refugees are concentrated in 48 temporary refugee camps in Andijan region. Local authorities are also opening new camps. The vast majority of the refugees are women, children and elderly people, but also men with gunshot wounds have been entering Uzbekistan.