This satellite was launched in August and it is reported that all is working according to plan for the U.S. Airforce Space Command and DISA-managed network. 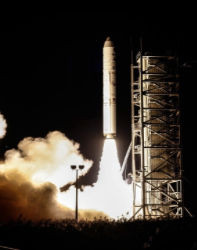 ORS-5 is a single-satellite constellation with a primary mission to provide surveillance of activity in the geosynchronous orbit belt, where communications satellites are typically found, for the 45th Space Wing.

While in orbit, the satellite is using the DCA Lite Network to transmit collected data to AFSC and its mission partners.

The network relies on a telemetry downlink upgraded with greater bandwidth to communicate between the tracking station and the satellite. The upgraded downlink, currently running at the highest rate of all satellites supported by the Air Force Satellite Control Network (AFSCN), allows data to be transmitted faster.

Lester Vanbuskirk Jr., an AFSCN technical advisor said that without the circuit rate increase, AFSCN could not have supported ORS-5 at the Diego Garcia tracking station.

The DCA Lite Network was officially commissioned by the DISA Pacific Field Command on April 18.