Specialist software engineers working at Bristol-based company SCISYS are delighted to witness the Aeolus mission launch successfully into orbit on August 22 — the satellite, built in Stevenage, UK, by Airbus and owned by the European Space Agency (ESA) and controlled from their operations center in Darmstadt, Germany, relies on software developed by the Bristol team. 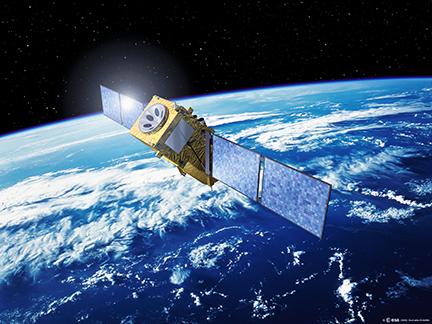 Artistic rendition of ESA's Aeolus satellite on orbit. Image is courtesy of ESA.

ESA’s Aeolus satellite is the first satellite designed to measure wind speed from space and uses a powerful ultra-violet laser that illuminates fine particles of dust caught in the atmosphere. Being in a polar orbit means that the satellite will scan the entire Earth every seven days.

Two specialist teams at the Bristol-based Space UK division developed the onboard software (OBSW) and a bespoke Operational Simulator. The company also supplied software solutions based on critical system technology for OBSW and mission operations on the ground. 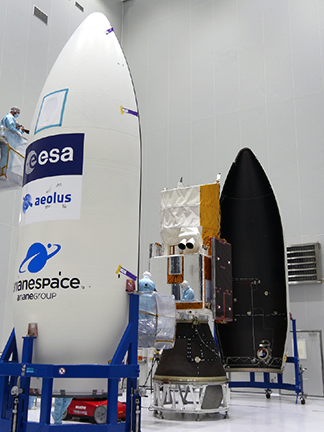 The Aeolus satellite just prior to encapsulation within the Vega fairing. Image is courtesy of ESA.

The Aeolus mission was first approved by the European Space Agency in 1999 and work commenced in early 2004. Most ESA missions use SCISYS onboard software, in either mission preparation or during spacecraft operations. Aeolus is designed to last at least three years, during which time the OBSW will ensure the correct orientation of the satellite, manage the flow of scientific data to the ground and control the operation of the laser. The OBSW is also responsible for adjusting the orbit when necessary and keeping the satellite at a stable temperature.

The Bristol team also created an Operational Simulator for the Aeolus mission. This is an essential support tool for operators in their mission-preparation activities and to validate ground-segment elements and interfaces prior to launch. The simulator is a key risk-mitigation solution and is used to test the onboard software pre- and post-launch to ensure it meets mission requirements. 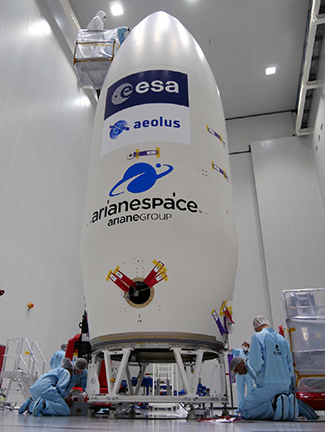 The Aeolus satellite encapsulated within the Arianespace Vega shroud. Image is courtesy of ESA.

Most of the work on the software for Aeolus was completed by 2010, but problems with the optics of the powerful laser meant that changes were needed to the satellite design. This required further software solutions to be developed by the SCISYS team.
Fourteen years after work on the mission began, the final software was delivered at the start of 2018. Since then, the team has kept a close eye on launch preparations.

Glenn Johnson, Flight Software Technical Lead at the SCISYS Space UK division, said that this has been an exceptionally long-running project and many people have worked on the software for several years.