NSR Analyzes and Reports on the Potential of Optical SATCOM 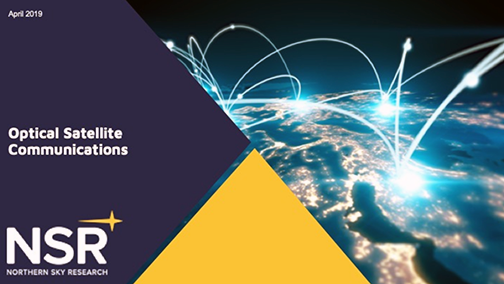 As a technology with the potential to impact both satellite and ground network operators, optical SATCOM is emerging as a contender and/or a complement to existing radio frequency (RF) communications infrastructure.

The promise of connectivity at “fiber-like” speeds alongside the mobility and regulatory freedom that RF offers sounds like an ideal marriage of high throughput rates and link availability. However, with only one commercially operable optical SATCOM system in space currently, the questions to ask are: what is the status of the market and what can we expect ? 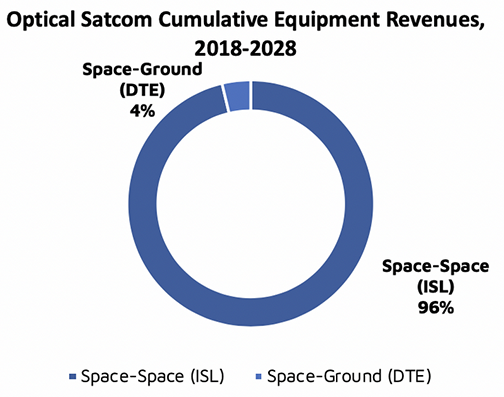 NSR’s Optical Satellite Communications report forecasts nearly $4 billion in cumulative revenue over the next decade for laser communication equipment in space. A significant portion (~ 96 percent) of this demand is driven by the need for mega-constellation inter-satellite links (ISLs). For even some of these constellations to meet proposed network sizes and close business cases, laser communication terminals (LCTs) numbering in hundreds/thousands are expected over the next few years.

Additionally, the Earth Observation (EO) market is experiencing a data downlink bottleneck as sensor capabilities improve drastically, and downlink optical terminals are seen as a potential solution. In both these cases, strapping an LCT on the spacecraft relieves antenna size, weight and power (SWaP) requirements and brings the ground equipment capital expenditure (CAPEX) further down, in addition to providing high bandwidth secure communication links.

Airbus’ SpaceDataHighway (SDH) in geostationary orbit remains the prime example for a commercial optical capability in space, with 20,000 links achieved so far. In the years since its launch, however, multiple optical SATCOM providers have emerged to meet the surge in LCT demand from non-GEO small satellites, for both ISLs and direct-to-Earth (DTE) links.

Last year, Mynaric tied up with a research institute to augment its products with improved miniaturization and link distances to position itself as a prime supplier for constellation networks. Forging the right partnerships and joint ventures will be a key aspect in ensuring that optical satcom delivers to its full potential, requiring participation from different stakeholders: the Empower Space Alliance and the more recent Tesat-Spacecom/KSAT/GomSpace partnership targeting nanosatellites are examples of such ventures.

Ground station players too are expected to play a pivotal role in the future of the optical downlink market: as an industry first, BridgeSat announced a set of agreements with ICEYE to provide optical ground services, in addition to space laser terminals on the SAR constellation. GHGSat is another upcoming EO microsatellite system with demonstrations lined up for space-ground laser links. As such next-generation high revisit/high resolution systems come online, downlinking via lasers will be a viable technology to ease up the data bottleneck at a subsystem infrastructure level.

The development of optical infrastructure for future SATCOM solutions will also require synergies between LCT manufacturers and ground service providers, and the BridgeSat/Tesat-Spacecom partnership to ensure such interoperability is a move in this direction. Meanwhile, other emerging space players continue to keep an eye out for further demand.

Much has been said about the technological advantages that laser communication brings over RF, but these need to be considered carefully alongside technology fit from a market maturity perspective. Significant challenges remain before optical SATCOM can really be positioned to capture revenue share in the space/satellite services industry and various research programs are working on the challenges. Atmospheric channel disturbances are still a major hindrance to DTE link services, and the equipment revenue opportunity hinges heavily on the success of the mega-constellations. Interoperability standards are yet to be established, while site diversity and adaptive optics are yet to be realized for commercial viability.

The market for commercial development of products and services around optical SATCOM began in earnest only in the last few years, with multiple companies having started out from scratch or evolved market offerings on heritage research/government technology.

Optical is today where RF was a few decades ago: it is not a technology looking for a market, but one that needs the proper value proposition, distribution channels and form factor.