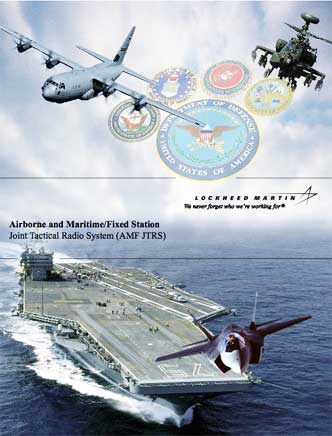 AMF JTRS is a software defined radio that is capable of providing Internet-like connectivity, providing a secure infrastructure for joint forces to send data, imagery, voice, and video.

“The recent aerial demonstration of the JTRS capability in an Apache helicopter represents a significant step forward in maturing the tactical network and providing a significant force multiplier for our Warfighters,” said Colonel Raymond Jones, Assistant Joint Program Executive Officer, JTRS. “By continuing to build out the aerial layer of the network, we will be providing enhanced range, over the horizon capability, and situational awareness to our soldiers on the ground.”

During the exercise, a pre-engineering development model AMF JTRS Small Airborne radio in the Apache allowed pilots to communicate directly with six disparate ground elements using JTRS Handheld Manpack Small Form Fit (HMS) Rifleman Radios. The Apache first provided an aerial network extension for ground based communications between troops who were separated by mountainous terrain and long distances. Using AMF JTRS, the Apache provided an automatic relay without having to deviate from its assigned mission of providing close air support for ground forces, and during the same mission enabled forces using HMS Rifleman Radios to communicate by voice and data with the Apache over greater distances. The Apache was able to break all connections in the network and then rejoin all units in the JTRS network without major delay or information loss.

“The Apache's participation not only emphasized the significant benefits of extending the network to the air, it also showcased the power of the network in linking the capabilities of the Apache directly to soldiers on the ground,” said Colonel Shane Openshaw, Apache Program Manager. “Soldiers depend on Apaches every day and this exercise successfully demonstrated that we are on the right path to improving the ability of aviation forces to support our ground soldiers.”

The Apache and the ground forces were communicating using joint tactical radios enabled with SRW. By using mission applications on the AMF JTRS radio, ground nodes in the tactical operations center were able to mark-up imagery and re-distribute to users connected by the JTRS network. Throughout the simulated mission, Apache pilots, using AMF JTRS, were able to seamlessly exchange command and control and situational awareness messages with six groups of disparate ground forces (each equipped with JTRS-enabled radios).

“Our team is delivering capability, and moving forward in creating a mobile, secure and affordable network that will provide an enormous operational benefit for our forces for many years to come,” said Mark Norris, vice president of Lockheed Martin’s AMF JTRS program.