Getting Galileo Gassed Up 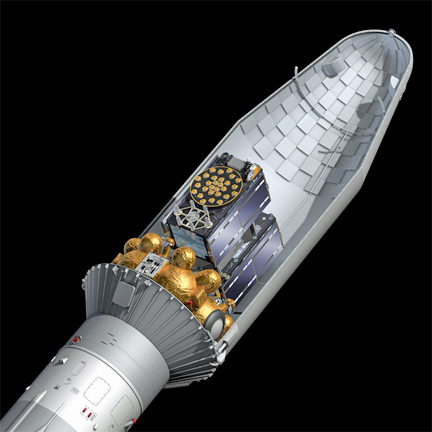 Cutaway view of the Soyuz rocket fairing carrying a pair of Galileo satellites.

[SatNews]  All of the elements for this month’s Galileo launch are coming together at Europe’s Spaceport in French Guiana. 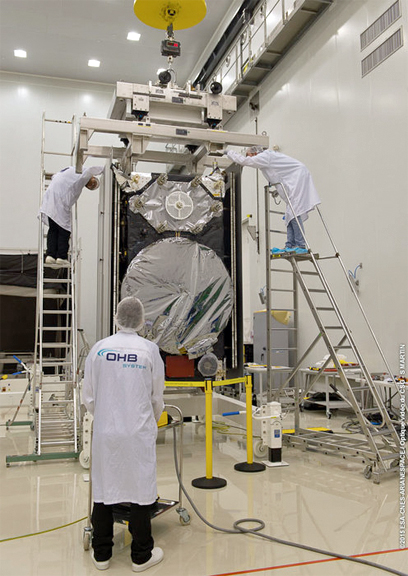 A Galileo satellite being prepared for fit check. This testing, to ensure the seventh and eight Galileo satellites fit onto their dual-launch dispenser took place in mid-February 2015. The dispenser sits atop the Fregat upper stage of their Soyuz ST-B launcher.

As the two satellites undergo final testing and preparations, the first part of their Soyuz launcher has also been integrated. Assembly of the Soyuz ST-B’s first two stages, plus its four first stage boosters, took place at the Spaceport’s Soyuz Launcher Integration Building last week. Assembly takes place on a horizontal basis, in the Russian manner.

The next step will be the addition of the third stage, then the main part of the launcher will be complete, ready to be transported to the Soyuz launch pad and moved to the vertical position. The final fourth stage of the Soyuz is the reignitable Fregat, which will transport the two satellites to their final 23 222 km altitude medium Earth orbit. This will be attached to the Soyuz on the launch pad, once the satellites, their dispenser and launch fairing have been mounted on it.

Since the seventh and eighth Galileo satellites arrived in French Guiana last month, they have undergone several tests—including one System Compatibility Test Campaign each, where they are linked up to the rest of the global Galileo ground segment as if they are already ‘live’ in orbit. The all-important ‘fit check’ was passed in the middle of February. The two satellites were installed separately onto their dual-launch dispenser, to check they fitted correctly. 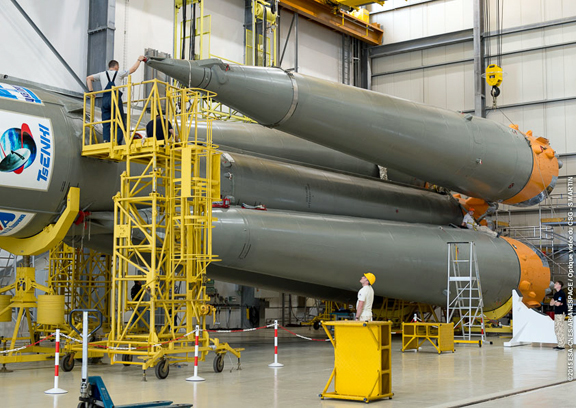 This dispenser has the task of holding them in place atop the Fregat during the launch and flight to their final orbit, then releasing them. They will be installed together later this month, after the satellites have been fueled. Last week saw the finalization of their hardware and software, and the charging of their batteries, on which the satellites will be reliant from the short but crucial period from their launch to the unfurling of their solar arrays in orbit. The pair of satellites are now ready to be transferred to the Spaceport’s S5A fueling facility, where they will receive the fuel to keep them controllable during their 12-year working lives.

After their fueling and final check, the pair of satellites will be in launch configuration. After a final review, they will then become available for Arianespace teams to carry out the final preparation, known as Combined Operations, leading to the launch day. The launch of the seventh and eighth Galileo satellite will take place on Friday, March 27th.