NASA, Boeing  + SpaceX...USA All The Way To The Space Station...U.S. Astronauts Will Ride A Dragon (Transporter To ISS)

[SatNews] ..."today we are one step closer to launching our astronauts from U.S. soil on American spacecraft and ending the nation’s sole reliance on Russia by 2017..."

U.S. astronauts once again will travel to and from the International Space Station from the United States on American spacecraft under groundbreaking contracts NASA announced Tuesday. The agency unveiled its selection of Boeing and SpaceX to transport U.S. crews to and from the space station using their CST-100 and Crew Dragon spacecraft, respectively, with a goal of ending the nation’s sole reliance on Russia in 2017.

"From day one, the Obama Administration made clear that the greatest nation on Earth should not be dependent on other nations to get into space," NASA Administrator Charlie Bolden said at the agency's Kennedy Space Center in Florida. "Thanks to the leadership of President Obama, the hard work of our NASA and industry teams, and support from Congress, today we are one step closer to launching our astronauts from U.S. soil on American spacecraft and ending the nation’s sole reliance on Russia by 2017. Turning over low-Earth orbit transportation to private industry will also allow NASA to focus on an even more ambitious mission – sending humans to Mars."

These Commercial Crew Transportation Capability (CCtCap) contracts are designed to complete the NASA certification for human space transportation systems capable of carrying people into orbit. Once certification is complete, NASA plans to use these systems to ferry astronauts to the International Space Station and return them safely to Earth. 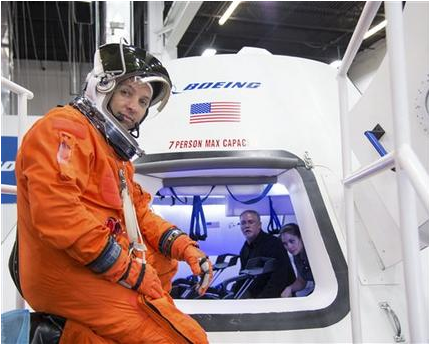 In this undated image provided by NASA, astronaut Randy Bresnik prepares to enter The Boeing Company's CST-100 spacecraft for a fit check evaluation at the company's Houston Product Support Center. On Tuesday, Sept. 16, 2014, NASA will announce which one or two private companies wins the right to transport astronauts to the International Space Station. The deal will end NASA's expensive reliance on Russian crew transport. The contenders include SpaceX, Sierra Nevada Corp., and Boeing. (AP Photo/NASA)

The contracts include at least one crewed flight test per company with at least one NASA astronaut aboard to verify the fully integrated rocket and spacecraft system can launch, maneuver in orbit, and dock to the space station, as well as validate all its systems perform as expected. Once each company’s test program has been completed successfully and its system achieves NASA certification, each contractor will conduct at least two, and as many as six, crewed missions to the space station. These spacecraft also will serve as a lifeboat for astronauts aboard the station.

NASA's Commercial Crew Program will implement this capability as a public-private partnership with the American aerospace companies. NASA's expert team of engineers and spaceflight specialists is facilitating and certifying the development work of industry partners to ensure new spacecraft are safe and reliable.

The U.S. missions to the International Space Station following certification will allow the station's current crew of six to grow, enabling the crew to conduct more research aboard the unique microgravity laboratory.

"We are excited to see our industry partners close in on operational flights to the International Space Station, an extraordinary feat industry and the NASA family began just four years ago," said Kathy Lueders, manager of NASA's Commercial Crew Program. "This space agency has long been a technology innovator, and now we also can say we are an American business innovator, spurring job creation and opening up new markets to the private sector. The agency and our partners have many important steps to finish, but we have shown we can do the tough work required and excel in ways few would dare to hope."

The companies will own and operate the crew transportation systems and be able to sell human space transportation services to other customers in addition to NASA, thereby reducing the costs for all customers.

By encouraging private companies to handle launches to low-Earth orbit -- a region NASA's been visiting since 1962 -- the nation's space agency can focus on getting the most research and experience out of America's investment in the International Space Station. NASA also can focus on building spacecraft and rockets for deep space missions, including flights to Mars.