[SatNews] COM DEV International Ltd. (TSX:CDV) has signed a contract with the Antrix Corporation (the commercial arm of the Indian Space Research Organization [ISRO]) to launch the M3M satellite on the Polar Satellite Launch Vehicle from India in 2015. 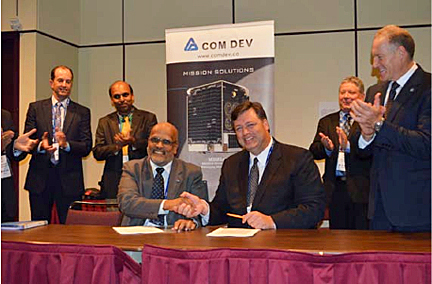 Dr. V.S. Hegde, Chairman and Managing Director of Antrix (left) and Michael Pley, CEO of COM DEV International (right), at a signing ceremony held at the 65th International Astronautical Congress 2014 in Toronto on October 1, 2014. Antrix Corporation, the commercial arm of the Indian Space Research Organization, will launch the M3M satellite on the Polar Satellite Launch Vehicle from India in 2015.

The M3M satellite was constructed by COM DEV under contract from the Canadian Space Agency/Public Works Government Services Canada for Defence Research and Development Canada and is also subject to a commercial data sharing license with exactEarth Ltd., a joint venture between COM DEV International Ltd. (73 percent) and Hisdesat Servicios Estratégicos S.A. (27 percent).

Michael Pley, CEO of COM DEV International Ltd., said, "This contract reflects a monumental effort between COM DEV and Antrix, and between COM DEV and the CSA, to close out our original contract and secure the most rapid replacement launch for the M3M satellite, which was withdrawn from its original launch slot on the Russian Soyuz rocket in July this year."

Peter Mabson, President of exactEarth Ltd., added, "We applaud the Canadian government and COM DEV for moving so rapidly to address this issue and are pleased with the selection of ISRO, which also launched our NTS satellite in April of 2008, the world’s first commercial AIS ship tracking satellite.”

The Antrix infosite may be reached at http://www.antrix.gov.in/

The exactEarth infosite may be accessed via http://www.exactearth.com/