A Lofty Project Now In The Arianespace Launch Zone

[SatNews] The Soyuz for Arianespace's next medium-lift mission is in the launch zone at French Guiana, where it stands ready to receive the two spacecraft passengers that will join Europe's Galileo global navigation satellite system. 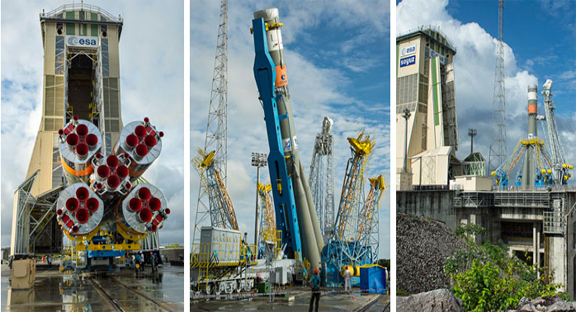 The 11th Arianespace Soyuz to be launched from French Guiana is shown during its rollout today. At left, the basic three-stage vehicle is transferred horizontally by rail from the Spaceport’s MIK assembly facility to the ELS launch zone, passing under the mobile gantry. Soyuz was then raised to a vertical position over the launch pad, to be secured in place by four support arms (photos at center and right).

Applying procedures that have been followed since the workhorse Soyuz launcher inaugurated the Space Age, the basic three-stage vehicle for Arianespace's March 27 flight emerged today from its MIK integration building in the Spaceport's northwestern sector. Riding horizontally on a transporter/erector rail car, Soyuz was transferred to the ELS launch zone, which was followed by its erection to the vertical orientation and positioning over the launch pad, suspended in place by four large support arms.

With this step completed, all was ready for the purpose-built 53-meter-tall mobile gantry to be moved into position around the launcher, a phase of the processing in French Guiana that differs from Soyuz operations at Baikonur Cosmodrome in Kazakhstan and Plesetsk Cosmodrome in Russia.  The gantry provides a protected environment for installation of the "upper composite," which consists of the two Galileo spacecraft, the Soyuz' Fregat upper stage and a two-piece protective payload fairing. 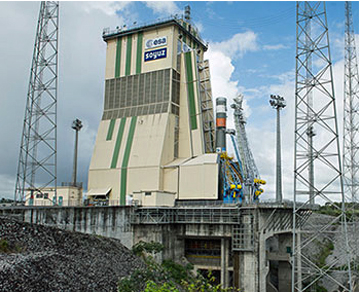 The mobile gantry is moved into position over Flight VS11’s Soyuz after this medium-lift vehicle’s daytime transfer to the ELS launch zone.

The March 27 launch, designated VS11 in Arianespace's numbering system, is scheduled to lift off at precisely 6:46:18 p.m. local time in French Guiana, with its Galileo satellite passengers to be deployed during a flight lasting approximately 3 hrs., 47 min. Total payload lift performance is estimated at 1,597 kg., which includes a combined mass of some 1,428 kg. for the two spacecraft.

Flight VS11's passengers—built by OHB System, with Surrey Satellite Technology Ltd. supplying their navigation payloads—are the third and fourth Full Operational Capability (FOC) satellites in the Galileo program, which is creating a European-operated space-based navigation system. The European Commission is managing and funding Galileo's FOC phase - during which the network's complete operational and ground infrastructure will be deployed. The European Space Agency has been delegated as the design and procurement agent on the Commission's behalf.