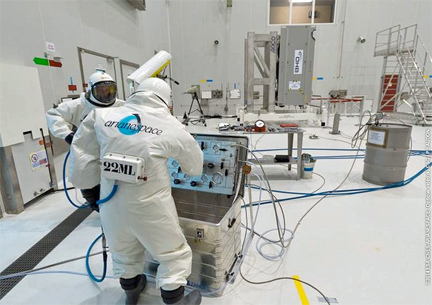 Europe's fifth and sixth Galileo satellites are being prepared for launch—fueling of the two satellites allows them to fine-tune their orbits and maintain their altitude over the course of their 12-year lifetimes.

Photo is courtesy of ESA and Arianespace.

[SatNews] Final functional testing of Europe’s twin Galileo navigation satellites has been completed at Europe’s Spaceport in French Guiana, on track for launch this Thursday.

The fueling of the two satellites, allowing them to fine-tune their orbits and maintain their altitude over the course of their 12-year lifetimes, took place from August 7th to 8th. Engineers donned protective SCAPE (Self Contained Atmospheric Protective Ensemble) suits to fill the satellites with hydrazine propellant. Then, on August 11th, the two satellites were installed together on the flight dispenser that secures them to the Soyuz launcher’s Fregat upper stage. The follow-on installation of the stack—the two satellites plus dispenser—onto the Fregat stage was completed on August 15th and, then encased within the protective launch fairing. 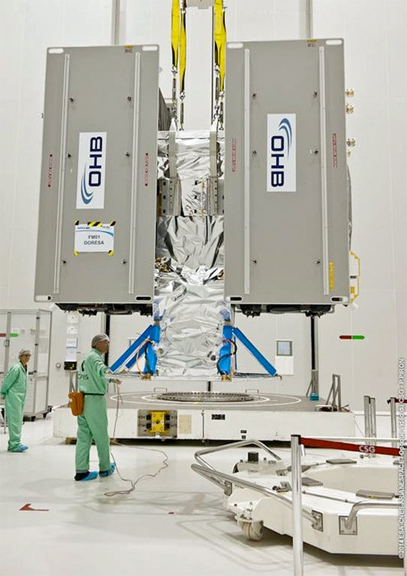 Europe's fifth and sixth Galileo satellites meet for the first time, attached to the dispenser that will carry them into MEO. This procedure took place in the S5 payload preparation building of the Guiana Space Centre.

This combined upper composite, also known as the ‘space head,’ will be attached to the other three stages of the powerful Soyuz ST-B launcher ready to haul it up into orbit on Thursday. Final operations for the launch will proceed early this week with a final countdown leading to a launcher liftoff scheduled for Thursday, August 21 at 14:31:14 CEST (12:31:14 UTC). At three hours, 47 minutes and 57 seconds after liftoff, the satellites will then be deployed from their Fregat by the dispenser’s pyrotechnic separation system once their final 23 222 km altitude is reached.

These new satellites will join four Galileo satellites already in orbit, launched in October 2011 and October 2012, respectively. This first quartet were ‘In-Orbit Validation’ (IOV) satellites, serving to demonstrate the Galileo system would function as planned. Now that work has been done, the ‘Full Operational Capability’ satellites being launched this week are significant as the first of the rest of the Galileo constellation. 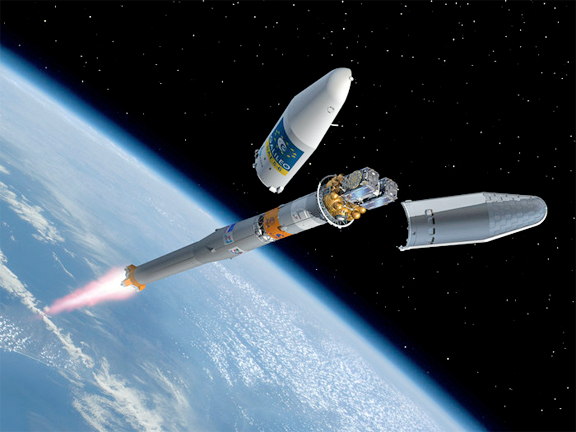 Artist's view of the Soyuz rocket carrying the first two Full Operational Capability satellites (SAT 5-6) into orbit, showing the moment the aerodynamic fairing is jettisoned. The pair will be launched together aboard a Soyuz rocket, joining the four Galileo satellites already in orbit.The launch is set for summer 2014, from Europe's Spaceport, French Guiana. The definition, development and in-orbit validation phases of the Galileo program were carried out by ESA and co-funded by ESA and the EU.

The definition, development and In-Orbit Validation phases of the Galileo program were carried out by ESA and co-funded by ESA and the EU. The Full Operational Capability phase is managed and fully funded by the European Commission. The Commission and ESA have signed a delegation agreement by which ESA acts as design and procurement agent on behalf of the Commission.