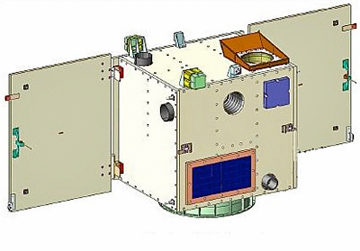 STSAT-3 graphic courtesy of KAIST.
[SatNews] South Korea's science ministry has said its new, indigenously built satellite has undergone its final inspections and is ready to be launched in Russia next week.

The Ministry of Science, ICT and Future Planning said the Science and Technology Satellite 3 (STSAT-3) is prepared to be launched on November 21st at Russia's Yasny launch base, located some 1,800 kilometers southeast of Moscow. The STSAT-3 is equipped with an infrared radar that can detect changes in temperatures on the Earth's surface and underground, enabling the country to monitor subterranean activities such as volcanoes and earthquakes. The satellite can also be used in detecting forest fires and tracking water pollution, the ministry said.

The STSAT-3 will complement the Korea Multipurpose Satellite-5 (KOMPSAT-5), the country's first satellite with a synthetic aperture radar, also launched from Russia's Yasny base. The KOMPSAT-5 was launched on August 22nd.

Both the KOMPSAT-5 and STSAT-3 satellites were originally scheduled to be launched prior to, or during, 2011, using Russia's ballistic missile-turned space launch vehicles. However, their launches were delayed due to what officials have called "political issues" within the Russian government and military. (Source: GlobalPost)