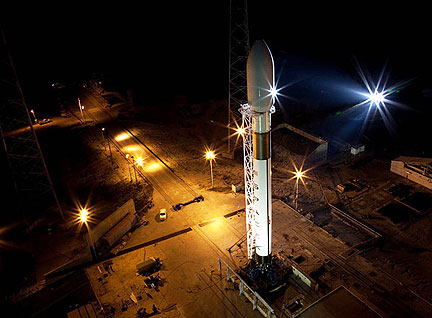 SpaceX Falcon 9 on launch pad at Cape Canaveral AFP, with SMDC-ONE and others aboard
About 45 minutes after the 8:43 a.m. CST liftoff, the Army SMDC-ONE (Space and Missile Defense Command - Operational Nanosatellite Effect) nanosatellite deployed from the second stage of the rocket, which also carried other payloads. Ground stations at the Space and Missile Defense Command/Army Forces Strategic Command headquarters on Redstone Arsenal and at Colorado Springs, Colo., quickly began receiving data from the satellite about the health of its systems. "The launch and deployment of the first SMDC-ONE nanosatellites is intended to demonstrate the concept of sending and receiving data from unattended ground sensors using small, low-cost, low earth orbit satellites," said Lt. Gen. Kevin T. Campbell, commanding general, Army Space and Missile Defense Command.

The nanosatellites would be constantly overhead, collecting data from ground sensors and relaying it over the horizon to commanders, according to John London, program manager in the SMDC Technical Center. The nanosatellites can also be used for communications and, if the concept proves feasible, could quickly be configured for other specific missions. The ultimate goal is to have satellites that cost around $300,000 each and are either secondary payloads aboard other rockets — as in Wednesday's SpaceX launch —- or that could be put in orbit virtually on demand by a new class of smaller boosters, the Multipurpose NanoMissile System. Dynetics in Huntsville is already working on MNMS, which has a goal of putting a nanosat in orbit for about $1 million. The team hopes to have a sub-orbital flight test, complete with satellite, in 2011, and an orbital test in 2012.

This is the Army's first satellite development program since the 1960 Courier 1B communications satellite. The SMDC-ONE satellites each weigh less than 10 pounds and are about 14 inches long. In April 2009, SMDC took delivery of eight of the four-kilogram satellites at the end of a one-year contract effort led by Miltec of Huntsville, Pericle Communications Company, of Colorado Springs, Colo., and Clyde Space Limited of Glasgow, Scotland. Two more of the SMDC-ONE satellites are scheduled for a launch in late 2011.