Elon Musk says SpaceX's Starlink satellites will autonomously avoid hazards in orbit. Experts are not so sure...

The 60 Starlink satellites that SpaceX is preparing to launch tomorrow, after two delays last week, are the first in a planned mega-constellation of nearly 12,000 satellites that Elon Musk hopes will bring affordable broadband Internet to everyone in the world. 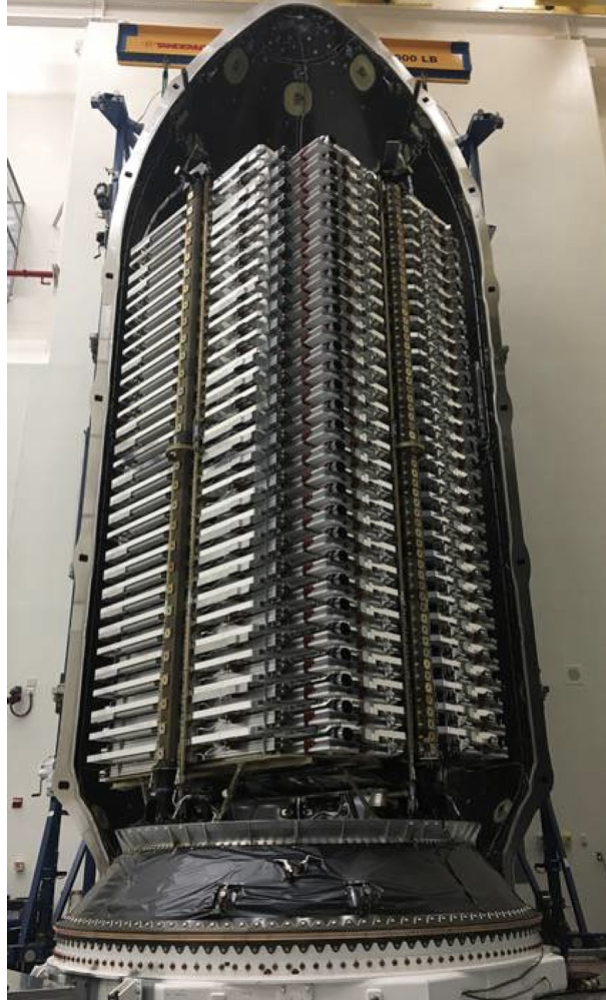 However, once launched, they will occupy low earth orbits (LEO) that are becoming increasingly crowded with other satellites and space debris.

Last Wednesday, SpaceX revealed that its Starlink satellites will be the first to autonomously avoid collisions with objects in orbit. Elon Musk told reporters, “They will use their thrusters to maneuver automatically around anything that [the U.S. military] is tracking.”

According to multiple experts, however, a single source of orbital data is not good enough to automate critical decisions about safety.

Today, ground-based radars operated by the U.S. military and private companies track everything in LEO larger than around 10 centimeters in size. When two objects look like they might collide, the U.S. Air Force issues a conjunction alert with the probability of the collision. At the moment, satellite operators review such alerts manually, conduct their own assessment or consult other sources, and then choose whether or not to move their spacecraft.

“Collision probabilities are like people—no two are created the same way. It’s a very poor metric to use as a sole basis to do maneuvers,” says Moriba Jah, an aerospace engineer at the University of Texas at Austin. “Some people use the alerts and other people disregard them because they just don’t trust them.”

“Without frequent measurements, the data uncertainty can be high,” agrees Raymond Sedwick, an aerospace engineer at the University of Maryland's Center for Orbital Debris Education and Research. “It’s like saying, something is going to pass within 100 meters of your spacecraft, with an uncertainty of 1,000 meters. What do you do about that? Do you stay or do you move?”

When faced with a 12 percent chance of a collision with a rival CubeSat in January, earth observation startup Capella Space decided to move its satellite. “With the time prior to moving, the time the maneuver takes, and a post-maneuver phase to check things out, it certainly disrupted our business,” says Capella CEO Payam Banazadeh. The satellites missed each other.

As LEO fills up with more and more satellites, the number of conjunction alerts is set to increase dramatically. Glenn Peterson, a researcher at the Aerospace Corporation, has calculated that if all the mega-constellations planned for LEO reach orbit, more than 67,300 alerts would be generated every year.

SpaceX’s solution is to automate the process. When SpaceX receives a conjunction alert for one its Starlinks, it will send the information directly to the satellite, which will then take appropriate evasive maneuvers using on-board electric thrusters. SpaceX could not immediately confirm whether the satellites would move in response to all alerts, or just those reaching a certain probability of collision.

“If [you react when] someone tells you there’s a 1 in 10,000 chance that you’re going to hit, you’ll be making a lot of maneuvers,” says Hugh Lewis, an engineering professor and space debris expert at the University of Southampton. “If you set your level at 1 in 50, you won’t be making lots of maneuvers but you’re potentially going to be hit. I think the ultimate decision should have a human being involved in it.”

There is also the possibility, albeit remote, that the satellite might inadvertently shift itself into the path of another object.

“I think the ultimate decision should have a human being involved in it.” —Hugh Lewis, University of Southampton

A Space Act Agreement between SpaceX and NASA, signed last August, shows that Starlink satellites will use a powerful Linux multiprocessor system-on-chip, highly accurate GPS hardware, and NASA software to fix their own positions to within centimeters.

It will send that information  to the Combined Space Operations Center, the Air Force unit in charge of space traffic. “This is absolutely vital for spacing and maintaining the constellation,” says Lewis. “But it’s not going to help you at all figure out where other objects are.”

Given that Musk is also the CEO and co-founder of Tesla, a comparison with autonomous vehicles is inevitable. “Nobody’s even comfortable with driverless cars yet. Now, apply that [technology] to a spacecraft traveling orders of magnitude faster in an environment that’s really quite congested, and where you can’t see everything,” says Lewis. “This is unproven, untested technology destined for not just one satellite, but potentially tens of thousands.”

“The key to orbital safety is transparency and predictability,” says Jah. “People need to tell other people where their stuff is located so they can move out of the way.”

However, unlike some of the other companies building mega-constellations, SpaceX has been quite secretive about its plans and technologies to date.

“The silver lining is that once the spacecraft go up, they cannot hide them,” says Lewis. “Everything they do will be visible to people on the ground. And I’m going to be one of the people watching to see what happens.”